In which you meet Una 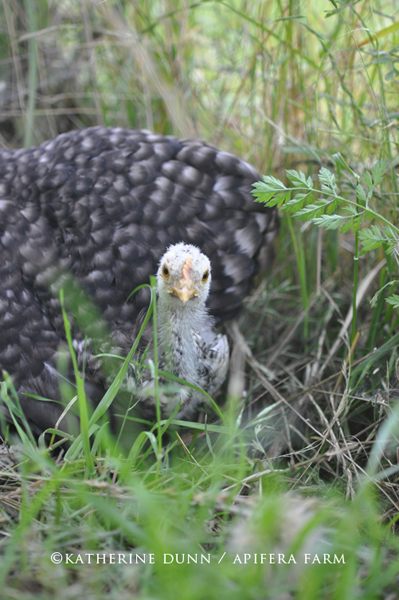 "I am not as pretty as the others," she said.

"You are fine, and you will grow and your wings will be fine wings," said the elder Henny Penny, her surrogate mother.

Of course, we assume she is a she. We hope for that. Her father is one of two gents, we won't know until she grows. The mother could be many, but we are grateful Henny Penny has taken her under her wing.

How did this happen, you ask. One chick? Is there logic behind this? No, there is no logic. It is my doing, my fault. After my mother died, I let Henny continue to set on some eggs. I had lost track of their age, and it only takes 21 days for a fertilized egg to be a chicken. I did not have the mindset dealing with my mother's death to pull the eggs and toss them to the pig. They might have been near hatching, I couldn't know since I lost track. And please don't inform me about candling eggs.

But then at the same time, Chicken Jack, age 3, began ganging up on Papa Roo, age 10+. This happens in flocks, roosters shift with age. There were severe knockdowns, requiring lots of healing on Papa Roo's part. I had to separate out Chicken Jack each nite and bed him elsewhere. Then I had to keep Papa in the roost all day with some girls. It wasn't fair and only a matter of time before Papa would be killed. He was my first priority. So I did a trial rehoming of Chicken Jack to my good friend's hen hut, where I ride, and it is working out and it's been a few weeks. I'm grateful as I really like Chicken Jack and I can see him when I ride, but Papa can live in peace.

So back to the eggs pile under Henny. One day I just said, "I must get rid of the eggs, I can not run the risk of having more roosters."

And I tossed them all to the pig, none were far along. Henny sat there quietly with three eggs still under her. I gave two to the chickens, one being about 14 days along. I reached for the last egg, but stopped, and left it in Henny's care. Two weeks later, she had a chick and I named her Una.

But the story does not end there. Having one chick is problematic. There is no group of chicks to support and protect you in the hierarchy. Henny and Una have been living in the chick hut, a secure area within the main hut. And each day, Chicken Named Dog makes it clear she wants that chick for herself. She has gone after Henny [ a small Bantie and over 10 now] and bloodied her, ripping her comb half off. So, I have decided it is best to give Chicken Named Dog a clutch of eggs of her own to set on. She is pleased. That way as little Una develops, she will have a better chance in the flock to have other youngsters around. That's the plan. Plans always have side roads.

And that is why my loyal husband is working in the chicken hut all day even in this heat. He's making a new wing for the youngsters and their mom so they can have outdoor access and still be safe.

I suppose we might have more roosters. But I will do what needs to be done if that is the case. 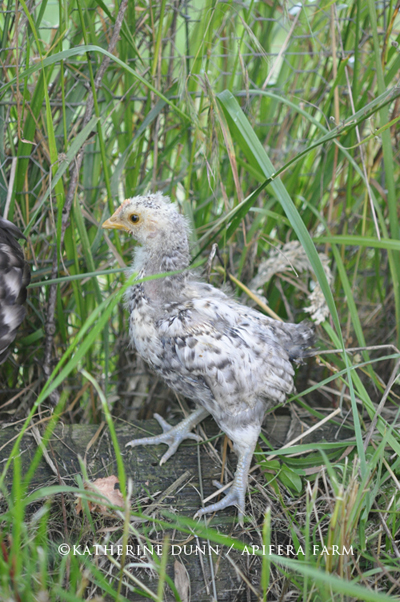 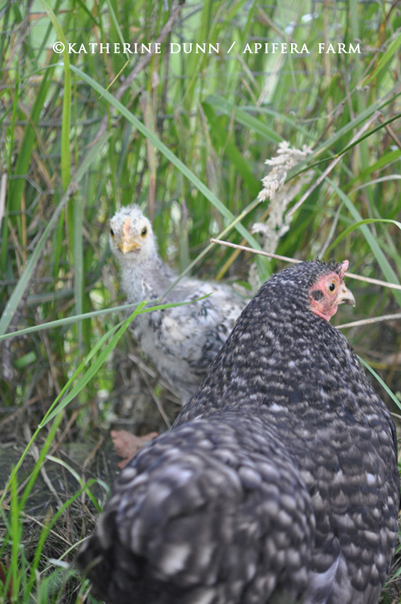 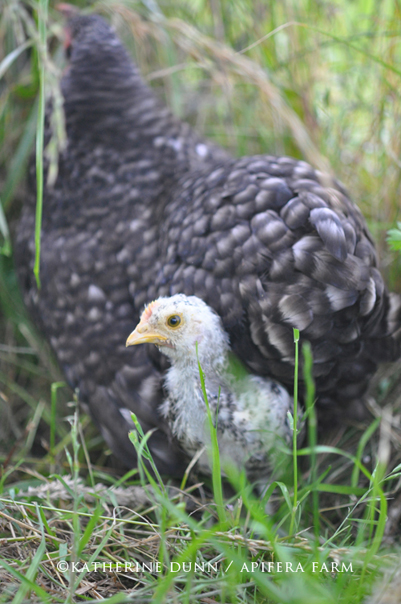 Your feet are an awfully nice shade of pearly gray. You go ahead and strut whenever you get the chance.
xx
Julie

ps Does candling mean using an egg shell to float a candle in a birdbath?

Candling -which I've never done- is when you hold up light, hence a candle, to the egg to determine how far along the fetus is.