The story of The Three Janes 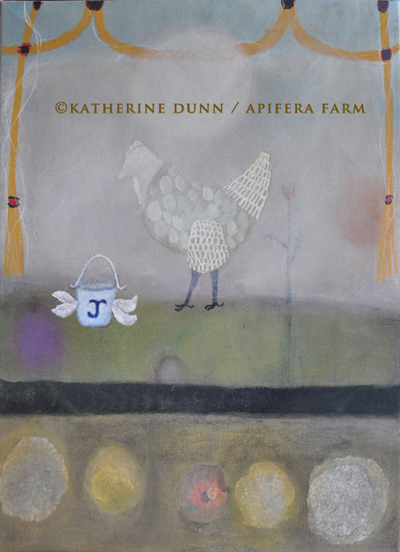 In which we see how chicken, mother and daughter get entwined by the muse...

Years ago, I had three wonderful Barred Rock Hens - they looked very similar except for slight variations, and I decided to collectively name them "The Three Janes": One was named for my mother, Jane, another was my husband's long deceased grandmother, the other after a dear friend.

Over the years, "The Three Janes" became "The Two Janes" - but each hen had a long, happy life. And at some point there was only one Jane left, and she is still with us, and she is the hen named after my mother.

I was working on painting for my last show and I was thinking of The One Jane for some reason - the pattern of feathers is so delightful. It was a month or so before my mother would die - but of course I had no idea that would happen. I was just thinking about my chicken, Jane. As I painted her, I felt I had to make her ethereal, and used all white, so her body and feathers looked angelic, floating. I didn't concern myself with why I felt I needed to paint in this gauze like way - I never question the why of it while in the process. It's all a little bit of magic anyway.

I placed wings on Jane's bucket, so no matter where she ventured, her bucket could gather her lovely eggs.

Perhaps 3 weeks later, my mother died. I had already called the painting "Ode to Jane". I did not think it morbid, I just was so touched that somehow Jane the chicken had enticed me and my muse to paint this ethereal homage, but that homage also turned out to be for me - to honor my mother. My mother loved eggs, and I suspect there is a bucket with wings somewhere that she might encounter.

The One Jane is still with us here at Apifera - she is very special and lays almost an egg a day for me. Sometimes, I see a bucket roll by in the wind, and I suspect there are gauze-like wings on it I can't see, trying to help gather her eggs.