A couple of scares with the elderly Misfits 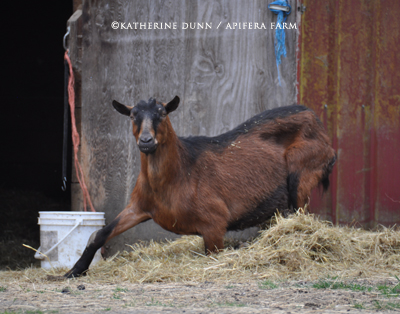 There are many ways to help the Misfits: subscribe or donate at various levels, buy books or visit the art sale. We all appreciate it and the Head Troll keeps you in her private database.

I've had a week of elderly issues with two of our beloved Misfits. Last week, I found Stevie–who is very crippled and unable to totally straighten his legs-cast on his side in the barn. I was able to help him up and he was fine, as I got there in time. Stevie's paper work states he is about 8 years old, not ancient, but for a large goat in his condition he is entering elder statesmanship.

This morning I found him cast again, near the pile of old hay/straw you see in this photo. He likes to lie in the cast off stall cleanings, so he can be close to the barn, but also get some sun on a soft spot. I suspect he just lost his balance and rolled on his side and just didn't have the strength to get up. Righting him was easy, and I can still feel a lot of strength in him-but I must face the facts that he is slowly weakening in his legs.

I do not want to think of time without him, so I will soak up each moment with him, as should you. He is a very strong presence here, a very unique goat with a story of survival. For those of you who don't know, he was rescued in Southern Oregon, along with a small herd of 30-all in bad shape. Stevie was the worst off, unable to stand or walk since he'd been living on his knees for so long-because of neglected feet that left him with 10" curled toes. He'd been on his knees for so long that his ligaments had deformed [I am not a vet so I don't know if this is the proper term to use]. The Humane Society and a local vet donated an operation for him to enable him to at least stand and get off his knees. That was over 6 years ago.

I don't believe in keeping animals alive just because it is medically possible. It is not always right for the particular animal. And that is a call we all have to make with our vets and inner circle, and heart. When I first saw him, I wondered if this surgery had been the best thing for him. After living with him for many years now, I think it was. He is calm and enjoys his sun, food and giving his little pecks or kisses. He participates in the group when he feels like it. He is not an outcast.

But if he continues to cast and is unable to get up...this could lead to a stressful death in the middle of the night. The first time it happened, I wondered if Marcella had something to do with it-overplaying-but this morning I really felt it was a balance issue.

And then Scooby Keith went ill on us. Scooby is 13 and has never been the strongest goat, and never a strong eater of the supplement I feed the elders. He reminds me so much of Lofa, who I just adored. I was told by Sanctuary One when he came here that he liked to hang out away from the herd and stick near Aldo. But last Monday, he took ill, went off feed and separated himself out in the lower field. It wasn't anemia, he had good color. He had a bad fever. I treated him with the needed regime of the moment, which he is still on, and his fever subsided, he drank well, and now he is nibbling hay. But he lost a lot of weight, and he still seems somewhat off.

I truly believe that an animal knows -even for seconds-that a person is either helping, or is a threat. I know when I am giving shots and squirting stuff in their mouth it is unpleasant, but I feel they know I am helping. I just hope Stevie can stay a bit longer, and Scooby too, but it is out of my hands. I think it is easy to start putting human emotions in their heads-after all I do this in my stories, don't I? But my experience has taught me that the best thing you can give an animal is a consistent environment of safety and supplies [sun, shade, food, water, protection, vet/meds when needed], and communal companionship of their species. I try, it's all I can do. Whatever happens, they've had a good life here, and I've been so lucky to have been their caretaker. 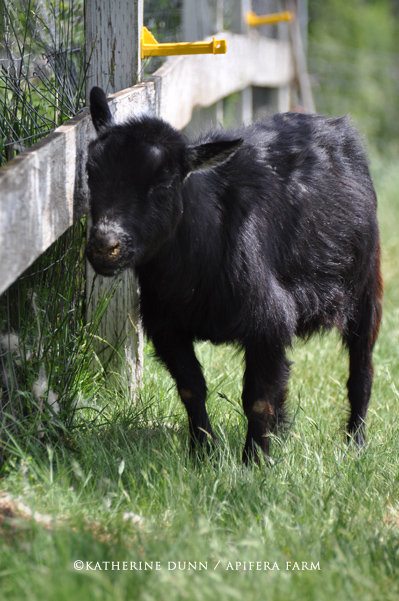 Posted by Katherine Dunn/Apifera Farm at 11:49 AM