The story of the lonely duck 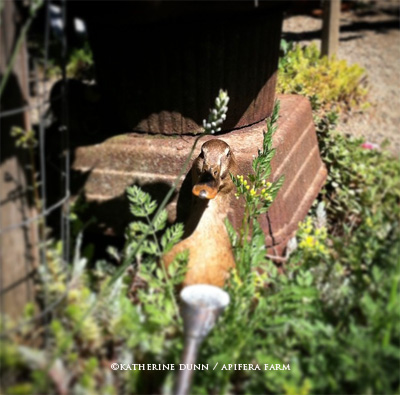 The Bottomtums, as the original six ducks were named [if you know ducks, you'll understand the name] were brought to Apifera by a woman who had to leave her farm when her husband was entering hospice. The 6 ducks came with their very own elderly goose, who you all know as Priscilla. We lost one of the ducks a couple years ago to mysterious circumstances in broad daylight; and this past month we lost one of the two males to an eagle strike, and another female died of natural causes. These ducks are old, they have had very good lives being able to free range and have someone shepherd them inside at night for protection. So that left us with 3 ducks–2 females and a male.

A couple nights ago I had finished my barn chores but was missing a male and female duck. I knew they often squeezed under the barnyard gate to our front yard area seeking the longer, cooler grass where they can nap and snap bugs. But they were nowhere. I quacked for them–yes, they come to my quacks, Martyn is always impressed with this and in some ways so am I, I didn't train them, they just seem to understand my quacks are to guide and help them.

So Martyn had come home around seven and I asked him to search the streamlet that goes alongside our drive. There are still some small pools that haven't dried up for the summer. And sure enough, there was the pair, happily paddling in the six by six foot pond. They looked so content, I hated to bring them back to the barn, but that was Raccoon's private fishing hole and I knew they would be his dinner. I easily grabbed the male. I headed back up the drive, quacking, thinking the female would follow. But the female stayed put in her little pond. I returned to get her, but she waddled under the small footbridge we had built there. She was able to squeeze way under it, so even if I stretched out on the ground [while holding my other duck, no easy task] I could not reach her. Martyn came down and we both tried for a half hour to get her, no luck. With a lot of talk, we decided to leave the male in with her under the bridge, knowing either way, it was a risk. I was not as optimistic as Martyn about their night.

The next morning I found the female swimming. When she heard me coming, she flayed herself out on the shore like she was playing dead. This behavior showed me she had experienced something last night, as the ducks never showed that behavior of fear and submission. I saw some down feathers on the bank. I knew the male was gone. I walked up about 30 feet knowing the inevitable had occurred, and there were three mounds of feathers.

His beautiful body, with limp orange feet, lay there, his inner carcass eaten. I buried him in the bramble.

I left the female there for the day but early evening went to get her. She swam into some inner pond under blackberry bramble and I had to crawl on my belly and reach in under the thorns to get her. But what I noticed most was her attitude. As I carried her up the drive, her neck was hanging low, her head down. Usually she carried it upright.

It is not a world of Disney here, but I must say that I firmly felt her sadness. When she entered her nighttime stall, she went to an opposite corner from the remaining female duck and Priscilla.

Just now I had to do some watering in this incredibly dry weather we are having. I was in an area of the gardens the ducks never wander to. But I kept hearing a quacking. Ducks can smell water from long distances and since I was spraying about ten feet from her, she let me know she was there. But I couldn't find her.

And then I saw her, squished under an old fireplace that we use as a sedum garden. I thought she was just hanging out, but she was actually stuck. I managed to free her, carefully, and hosed her down in case she was hot.

Why she picked that odd spot, I don't know. I had always thought the ducks were from the same hatch, but now I feel she was more bonded with that male and perhaps they were more mated as a pair, versus siblings.

Last night I also found Old Mama Sugee having a seizure. I stayed with her but then heard Priscilla in distress, and turning around I saw her with her head stuck in a fence. She had really curved her neck in a way that made it impossible to get free. I managed to free her, but looked at the sky and expressed something to the Universe,

Is it now the time of the Apifera fowl? Have you spoken?

Priscilla used to have control over the flock, and would herd them about, and protect them. As she grew incapable of squeezing under gates, the ducks would wander without her. Now Priscilla is mainly alone, free ranging, and she comes in at night with the others. But the flock of two is in a quiet chaos without her.
Posted by Katherine Dunn/Apifera Farm at 5:16 PM

Email ThisBlogThis!Share to TwitterShare to FacebookShare to Pinterest
Labels: The Bottomtums

Poor little duck. Our 6 Campbell's, one drake and 5 females respond to quacks also. To shoo them into the barn at dusk from their enclosure outside I go in and spread my arms wide and flap and quack and they scoot right in. Our male was a rescue and he has silver appleyard and a pouf and is bigger than the older girls. He does a good job of tending the ladies and keeping them from harms way. Our one remaining bunny - a mini-lop - hangs out with them all day and in the barn at night. We have eagles and hawks so I have netting over their enclosure, but they do love their big water tubs for splash about. The girls are 9 and healthy as can be? Amazing really. xox