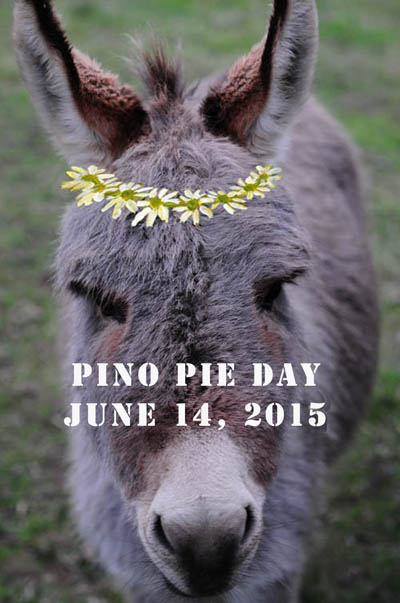 I am quietly preparing for the final Pino Pie Day. I say quietly because that is how it feels this year to me. It is not a sad quiet, just a realization that Pie Day is coming to an end, and I think it is a quiet end. Each year, the event has a different energy, and this year, I intuitively sense it will be a quiet energy.

Every year I try to add something new to the event-a Museum of Misfits, free kisses from Stevie, the Prayer Tree this year- but each year I have not been able to build the event in a larger market. The Portland media never were interested and that was always frustrating- what, you don't want to do a write up on me and my donkey? Assinine. Donkeyronkulous. The costs went up each year it seemed, but not the net.

The event has never been about making tons of money [I'm lucky to net $1500, but that is helpful for the Misfits] but it has begun to be financially problematic.

People have shown less interest in helping and donating this year, online donations have been very low even with the fun options of having virtual kisses from Stevie and more. For the first time I received no interested in having a local newspaper write about the event which always helps bring people in and the costs for putting it on have doubled. Hardly anybody watched Pino the Puppet's final movie. this year-even the Puppet is tired I guess.

It just feels 'over'.

Martyn and I were talking last night and I guess I was sounding discouraged and he made a very helpful comment, as he often does–

Maybe this Sunday is Pino's gift for you-to relax, and eat more pie. Be the guest of honor.

Out of the mouths of Dirt Farmers often come compassion and simple wisdoms.

So I have decided - even if the turnout is low, this Pie Day is for me. That might sound very un-host like, but I think I need it to be for me this year. I need the comfort of pie, and the dusty necks of donkeys to put my face into.It will be for The Misfits too, of course. But where there is a Misfit, there is me.
Posted by Katherine Dunn/Apifera Farm at 12:03 PM

Wise husband I would say. Still I hope you get some unexpected donations, that would be nice. xox

Dear Katherine, this is Sandra, I am a shepherd and animal lover like you! I have been following Pino Pie Day (from your blog and your pics.) since I discovered in a magazine. Even when this was your last Pino Pie Day, you will always have Pino love and Pies!!! I hope one day we can have our own Panchito Pie Day at our farm in NC, Panchito is our lamb who thinks he is a goat!. You have been and are an inspiration to me! Hugs, Sandra