Death of a tiny Apiferian 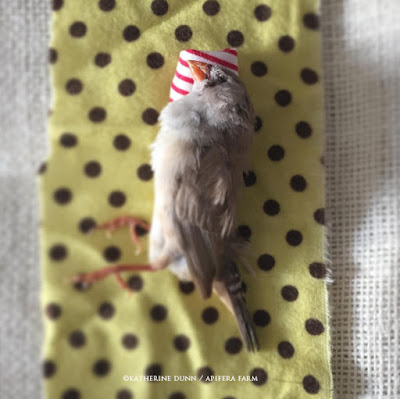 I found her this morning, surrounded by the busy activity of the other finches.

She was the only female and perhaps what was the most bitter sweet part of it all–having to watch the dominant male land by her body, look up at me when he heard my voice, peck at her body lightly, look around...

"Is she really dead?" he asked.

I do think he was making sure she was dead. If I told you he seemed sad, I guess you could accuse me of anthropomorphizing. But I've watched that male finch with her and he was the top guy, he would often light by her, and chirp off the other males. He told her when the fresh food was put out, even though she knew, but he always vocalized things to her first.

I think what was also very sad for us is we had noticed the males and female starting to gather things for the little bird houses in the cage. We were delighted. Even though we knew these birds were getting on in years, and the former owner said she was not breeding any more, we wondered if they were preparing for young. We also wondered if it was the daylight getting longer that set them to trying to make nests.

Either way, a couple days ago we put some more twigs and sheep wool in the cage for them-it was so fun watching them gather and move items into the boxes. The female would jump in every now and then,

"I think this is looking good," she'd announce, perhaps.

Now I wonder if perhaps they knew she was dying and they were preparing a place for her.

When I took her out this morning, the dominant male seemed lost, silent. So I put her back in the cage while I went for chores. He pecked at her some, but it was more like grooming than pecking.

I know she had a pretty good life for a caged bird-as the cage is large and she was treated well. In her last weeks here she had classical music and company with our movie watching at night.

Little birds, when gone, leave big spaces. We were fond of the female as she was the only one. I had not even named her yet-which to her did not matter. I came back from chores and brought her to my studio. Perhaps it was all that is going on around us, the fear and anxiety that is visceral in the air-for many-and the fact I haven't really taken enough time to weep about it, but I sat there with that little tiny creature in my cupped hand, examining her tiny tail of speckled feathers, the bunny at my feet, and I cried quietly for her. But like the feral cat I held in my arms at the old farm, days after my father died almost nine years ago, I was crying for much more than the body I held. Like that feral cat, I had hardly gotten to know this creature either, but I do know she brought nothing but beauty into my world, with song, her little feathers, and her beauty in flight. Crying for her today was a gift she gave me. I think I needed that.

Today would have been Huck's 13th birthday, he died in August, suddenly to cancer. I like to think she flew to him, to let him smell my scent that he knew when he was on this realm. Perhaps that is nonsense, but I did imagine it as I held the bird today.

Posted by Katherine Dunn/Apifera Farm at 10:12 AM

Email ThisBlogThis!Share to TwitterShare to FacebookShare to Pinterest
Labels: Grief, The Birds of Apifera, The Little Apiferians

I just lit a candle for this little soul and for Huck and even if i am very far from you, i care about you my friend, i do care .Soft hugs.

Sad to see this new Apiferan gone so soon, but glad she spent her last days seeing that her flock would be well cared for in their new home.

It's been such a hard season of transition ... I have been grateful for the cleansing of tears, fortifying me for the path ahead. I love the image of this little bird flying to Huck to bring him word of how you all are doing. It feels so right. xo