We are the Insides 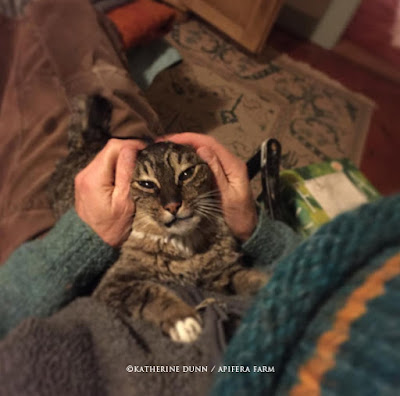 The Insides live in the house. You might know the story of Big Tony. When we arrived at the old farm in Oregon, there was a new litter of semi feels in the barn. Before I could trap the very industrious Mama Kitty-it took two years-she had another litter. The litters were all spayed and neutered, and continued to live out their lives at Apifera.

When I began trapping the cats, I never thought I'd land a 20 pounder the first day out. But there he was, lying contently in the trap, having just finished off the tuna that was placed their to entice him. He was charming and dignified throughout the entire transport to the vet for neutering. Within days of losing the responsibility of procreating, Big Tony made his way to the front porch, accompanied by several of his children. At the time, we had no indoor cat, just the dogs. Each night I'd casually alert Martyn that Big Tony was there, and each night I got him in the living room for longer and longer, until Martyn gave up and soon after Big Tony was sleeping in the bed. But not on my side. He liked Martyn's side.

It's the story that has repeated itself with Apifera cats, as it did years later with Itty Bitty.

So Big Tony is still with us in Maine. He is a complete grandpa now, losing weight off his backbone, but still able to jump. He has several favorite sleeping baskets in the sun, one in my office where he spends most of the day. But it is still Martyn he likes to attend to while we have our wine, or watch movies. He has a routine of putting his paws up stretched and staring into Martyn's eyes. Later, when I go to bed, he comes int to be with me and sleeps on my side of the bed now. Sometimes I wake with his paw on my hand.

The One Eyed Blind Pug II, aka Hughie and his chocolate sidekick have a very easy life, complete with beds by a fire, toast crust in the morning, and bowl licking at dinner. And now they have birds singing to them in the morning. 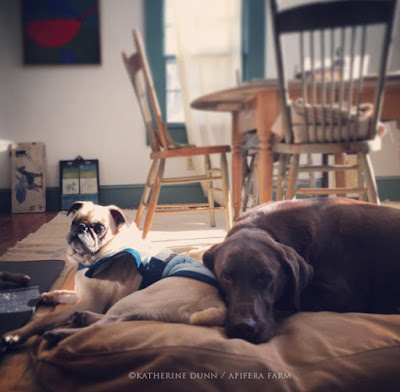 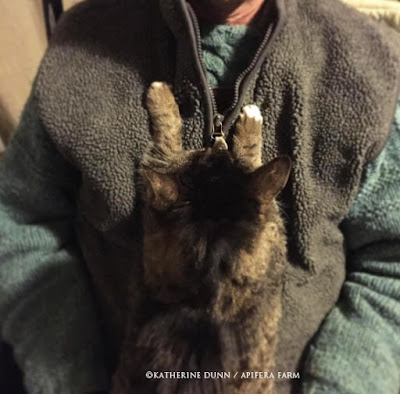 Posted by Katherine Dunn/Apifera Farm at 9:52 AM

It is so funny ... I was the one who wanted a cat and my husband finally agreed (he declared himself to be an "noncat person"). It didn't take long ... I would catch him and Frida (our first and so far only cat) snuggled in together like an old married couple. They would look up, startled and clearly "caught in the act." I joked that they had been a couple in a previous life. She loved us both but preferred Rick for warmth and cuddles (and in turn she would keep his bald head warm at night!) Love seeing the Insides and hearing about the wonderful daily routines. Stay warm! xo

How much i love to see your happy animals!! I never have enough of your lovely stories.Thanks for sharing all this and for all you do for the animals. Take good care of you my dear friend.

Bonjour Jeanne-Sylvie! The animals can not help make us all calmer and smoother, I agree! Lisa, you might want to check out Jeanne-Sylvie's blog, I think you have some common interests. And your cat experience, and our husband's bad heads- ditto!
Martyn always looked at me with a teeny smile when Itty would crawl into his lap, and then she would look at me with a smug little look.