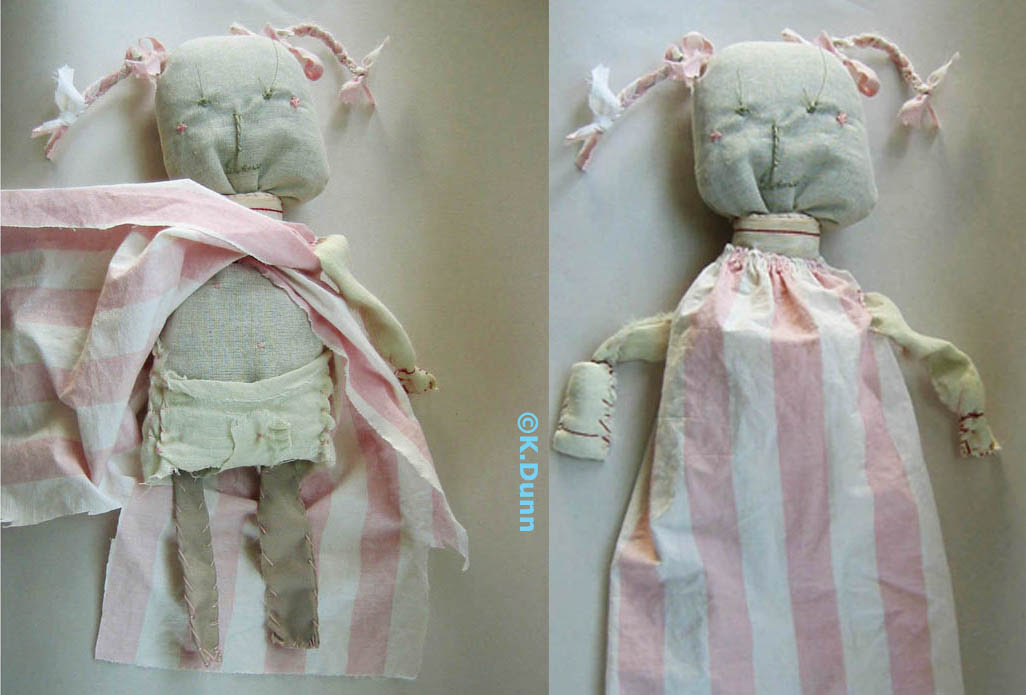 I have added 'anatomically correct' rag dolls to my repertoire. I had way to much fun making this raggedy lavender filled creation . Just when I thought I was done, I felt she needed a navel which led to other girlie features. I have memories of beautifully made dolls of my mother's, where the clothes are hand made and even the undergarments are distinctive, so my little farm girl had to have some undies too. Who knows where this will lead. A new Muppet empire, made of farm girls and animals....Anyway, I listed it on the Etsy shop ....Stay posted for more farm friends. I'm pleased that little Goldie the Chicken is off to live in Colorado... 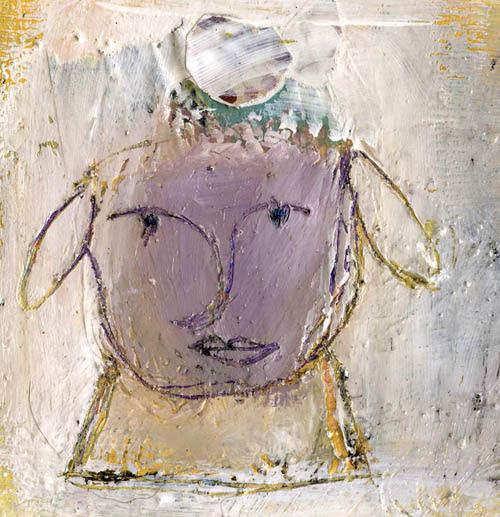 The weather has turned spring like, I'm pleased to say. Just a rise of 15 degrees or so and the animals turn childlike, playing more, the donkeys play tug of war on their dirt mound with their rubber dish, and when I went to feed Sky Flower last nite, her Palomino body was no longer Palomino, but rather a mud caked color which she was quite pleased with. Today I let the 'boys" [Joe Pye Weed, Mr. T, Milkweed,Chickweed, Paco, and Pino] all run out in the area between the two barns. The ram's pasture is helplessly bleak on grass. While the donkeys and goats are quite content with weeds and blackberries, I find the sheep like to eat lower to the ground. Joe Pye Weed has not been looking his best. He has mystery marks on both sides of his body where hair has been 'chewed off', or rubbed off, but excessively. A couple farm friends have seen it, and it is still somewhat of a mystery. Not mange. Not lice. I've tried tea tree oil, and this week I'm putting Destin on him- a diaper rash solution of cod liver oil that does wonders for a variety of skin rashes I find, plus it's smelly so if an animal is chewing him, it might help. I haven't seen any animal chewing on him, and actually, we doubt this is the case, as the mystery shedding started back when he was confined on his own. It might be him nervously chewing himself, but I never see it.

I am getting excited for March lambing. Daisy already looks big, and I really hope she is not carrying triplets. I have started re-reading my sheep books, and it is time for my 'read all the worst case scenarios of lambing incidences and freak the shepherd out' - which is turning into an annual ritual around February.Perhaps this is why I doodled these little odd creatures this week - part lamb/part me/part fairy?...I framed them and put them on Etsy too.

As I awoke this morning, Billy the pug came into the bed with me. He likes to get under the covers in the morning, and snuggle his face into my armpit as I hold him. He has done this since he was 8 weeks old, when I use to carry him in my overall pocket [he weighed 1.3 pounds when I got him]. Huck came running in and smashed his 5 pound wet nose in mine, another morning ritual - and it came to me that dogs are so consistent. They are unlike children. Dogs are born and are puppies for about 1-2 years, then they are who they are. They have personalities unique to themselves, but each day, you can count on your dog to be consistently who he/she is. They never let you down on that. Billy will never reach an age [he's 8] where he says, "You know, Mom, I'm thinking it's too girly to snuggle with you in bed, so I better not." And Huck will never cease to run in to the bedroom each morning to greet me and the day with incredible gusto. It is good to have certain beings in one's life who never let you down.
Posted by Katherine Dunn/Apifera Farm at 12:02 PM

I LOVE your art! I got an email from my friend Nic who told me to check your site! Wonderful! Your life sounds like a dream to me! I only WISH! I enjoy all of yuor artwork, animals and stories! Keep it up!