I've trimmed a lot of feet in my time - goats, sheep, unruly rams, mini donkeys, dogs and one eyed pugs - and often one encounters resistance on the other end. Of all the animals at Apifera, the animal I like trimming the least is probably Huck, the gentle chocolate love cupcake of a Lab who has the toughest, darkest nails making it hard to not bleed him.

But nothing compares to trimming the Pig.

Ah, my little pig, my 60 pounds of grumpopolous framed into a tidy, compact hippopotamus body. Now in the summer, Pig naps in the sun up against the concrete walls or on the added heat of the compost pile. She goes into a deep sleep and dreams, her little squishy eyes all mashed together so you know she is really in slumber land. That is often when I can trim her little piggie toes.

But in the rainy months, she naps under her bed of straw, so her toes were in real need of a trim. I had tried in vain to create devices to hold my dear pig so I could trim her with steady hand. I tried soft ropes to contain her but she scoffed and ran off with me falling in the hay dust. I tried to lay her flat like a sheep, resting my knee on her belly - but the sounds that emerged from her porcine body were so loud, so vulgar that the entire county might have thought a murder was occurring. Pigs can sound a lot like screaming humans when they are really upset.

I consulted our friends down at Sanctuary One where we adopted Rosie from and they suggested we give her a couple beers to relax her, something they do with their big pigs for feet trims. My vet had mentioned this about another animal years ago too.

So I brought home a six pack. I bought IPA, I figure if it is good enough for me, it is good enough for Pig. No Bud or Lite watered down brew for my Pig. I set the beer aside in my studio, waiting for the first warm day, thinking that the beer and warm air would surely provoke a long pig nap. But a few days later, the Pig's beer seemed to be disappearing. The Dirt Farmer was running low on brew himself, and thought he could get a beer heist by me, but no such luck. The next day, The Pig's beer was replenished, ready for the Great Pig Beer Festival at the drop of a hat.

Yesterday the day came - the first sixty degree day with sun. I fed Rosie an extra good breakfast with mashed cooked squash, and waited a couple hours for her to digest. And then, I set out tot he barnyard with two bottle of beer.

But what's this? Pig does not like the beer?? This is unheard of. I did pour it in a rubber dish so perhaps Pig wanted a chilled stein.

The beer was not wasted - it appears that Rudy, the old goat, finds beer thirst quenching! He snorked it up in seconds!

It was such a beautiful day, I had all the patience in the world. I waited and waited and finally Pig went down for a nap, and I snuck over and got one tip of one toe snipped. She was completely on to me now.

So I went to Plan B - beer infused grain. Now she loved that! I sat down on an old upside down bucket and I waited, and waited, and waited. And then it happened...she yawned. It was so amusing that I had to contain a snort. I'd never seen her yawn. She went down for a nap. I knew some Pig Whispering techniques with her and knew that if her eyes were closed I would have the best luck with my mission. With each snip of a toenail I took, she'd awake, but at this point she was so sleepy, she didn't get up. I rubbed that little belly and sang her pig songs and within time, all her feet were trimmed. Perhaps not the best trim job in the world, but her little piggie toes are much better.

It was a wonderful day really. I had decided upon waking that morning I would give my day up for the pig for the task at hand. I spent very quiet hours watching the animals, having the chickens come up and fan out in the sun and sit on my lap. I looked over the farm and thought of all the things we'd done in 9 years.

And over by the barn, an old goat napped too, content after his beer. 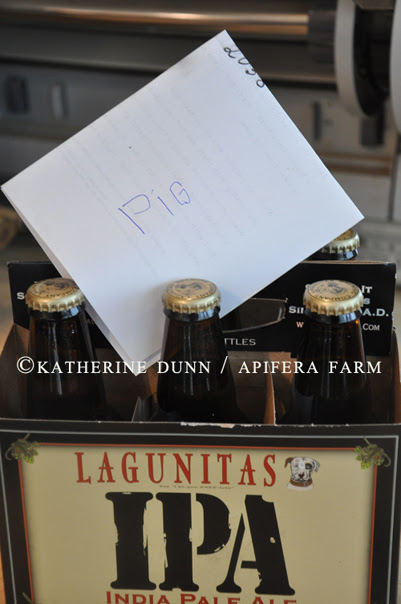 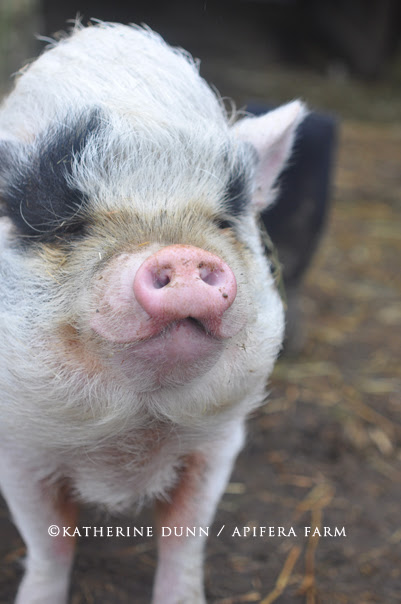 Posted by Katherine Dunn/Apifera Farm at 11:29 AM

So glad her piggie toes are better now. I must get to work on three sets of chihuahua toes,and believe me,herding chihuahuas is not always an easy task. *lol*

This is how much of a city-slicker I am...I didn't know that pigs needed toenail trims. Shame on me.

DOn't be hard on yourself. Can't list all the things I was clueless on when we first moved here- and the list continues to grow!

Oh oh, I just snorted at your piggy toe story. Our old kitty needed her claws trimmed the other day. I too had to wait until she was fast asleep to do the deed! The bunny gets hers done tomorrow. Have a good week, it's supposed to be rainy here in Nanaimo......sigh!

Carole- kitty claws are the worst - I once had two semi ferals grab onto my leg AT THE SAME TIME! So I don't envy kitty trims.