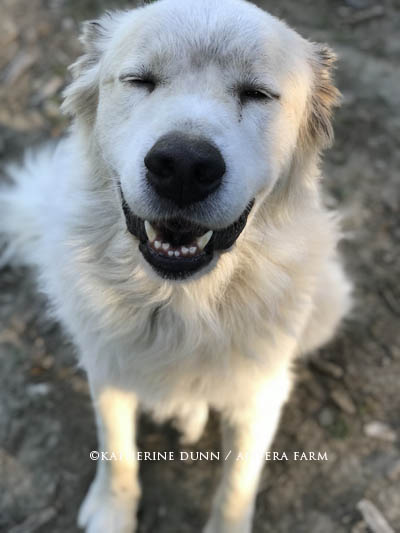 I have been working on the upcoming book about the story of White Dog, the creature that mysteriously appeared in our field one day...the same large livestock guardian breed [Maremma] as our Marcella who at the time was about 8 months old as I recall. Many scenarios were tossed around by readers, and me, and while we did seek answers to where he came from for a return, I'm grateful he is with us. He was thin, long toed and his collar had what looked like an old rope knotted and torn, indicating he might have been tied ups at some point. He was not a chaser of sheep or animals, was calm around all the various Misfits walking around...and he was intact. He also had a fear on arrival if anyone picked up a broom or rake and he would cower.

The mystery of where he came from was juxtaposed by his demeanor, which had a knowing and calm exterior, his inner thoughts seemed to ooze mystical qualities-for me any away. He was a magnet for anyone who arrived at the farm, or anyone that got to know him online too. His eyes are deep wells of story...and I have been trying to start this book for a few years. I realize now that coming to Maine was part of what had to happen, for both me and White Dog, to figure the book out.

One of the beauties of self publishing [a curse too at times] is I am my own boss, and I can share what I want with you when I want. I will be posting snippets as I go along, of art and prose. This book is going to be something substantial to hold in your hands-I am estimating over 250 pages, at about 6.5" square. There will be lots of prose-I have not written a wordy book for while and am ready for that and enjoying it. There will be art and photos. Another nice thing about being independent is when 'experts' tell me you should only have art in the book, no photos, I can just think,

But I have some tricks up my idea hat for this one. It will not be a cheap book to produce, none of them are. And I am not going to worry about that right now, I want the book to be complete by late year, or early spring and then the thought is to do a Kickstarter for it. I know when I get it done, the book itself is going to get people excited, as I know some already are. It's hard to know what will resonate with people, but this is a book I feel compelled to write, and as soon as I can, I don't know why I am feeling compelled this way.

The book shares White Dog's journey, but it also reminds us we can never really go back 'home'- that home no longer exists, only in our memory and it probably wasn't exactly as the memory is in our current brain anyway. The book also will not be for pragmatists, I don't think. I truly believe humans have the ability to hone their innate abilities, to recognize that 'sixth sense's all possess, but most people don't bother, can't see it, or are too busy being human. I have always recognized certain creatures that come to Apifera seem more intuitive than others, and while they all think instinctively, in order to survive in the herd or pack, some animals are just able to tap into people's inner worlds more readily. I think we all can work on our intuition, I know I am always questioning my abilities-and sometimes I stop and think,

Just listen, to your inside. 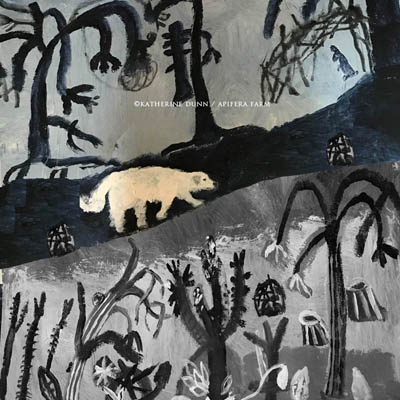 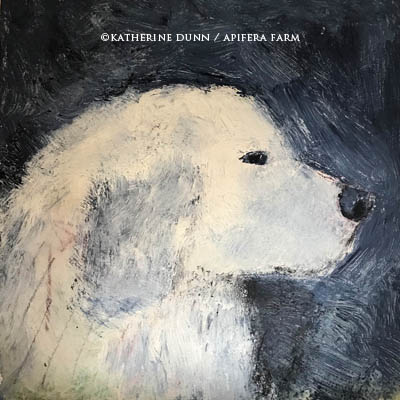 Posted by Katherine Dunn/Apifera Farm at 10:33 AM

I can't wait for this! I love every post about White Dog - I feel a connection with him, as silly as that sounds : )

Dear Katherine, I look forward to this book most especially! Kind regards,