I once was a shepherdess 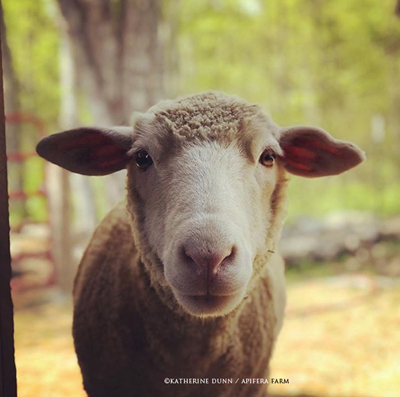 Little Sylvia Pettini is now three and she has blossomed and grown well, even her bad eye is normal. She had a rough start–she almost died after her now retired mother, Calla, who also lives here, rejected her and had mastitis. Sometimes I have to look twice as they look so much alike. Their wool is beautiful. She and her elder mother will live out their days here.

Of the many faces of animals that I've known since living at Apifera it is perhaps the faces of my old flock out West that come to me more often than you might think. I think this is because for starters, I raised them, I watched them get old, I buried them. We were a team. Until you've raised livestock-for whatever your reasons-you will not understand, it is not the same as owning sheep or livestock, raising them is an entirely different relationship. I suppose too one's intent in raising animals is entwined in the outcome. I loved being a shepherdess, as hard as it could be. I loved being their flock leader. One of the hardest parts in leaving the old farm was leaving my flock. I knew it was unfair to bring them to Maine and was unsure of what our land was like here. I did the right thing. They were hair she and it makes more sense to have wool sheep here I think. I chose to euthanize my two weakest and oldest ewes who were on their last year, but I wanted that end to be with me.

I sent some of my flock to live with young farm family and the rest, including that year's lamb's stayed with the new owner. I had many communings with my girls before we left, and I know they wanted to stay-it was the land they had been born on, it was what they as a flock were embedded in-their mothers and sisters, sometimes children or great grandmothers were buried there. While they respected my place in the flock, it was the land that was their true bond.

Besides learning about animal husbandry and all that goes with it-lambing, medicines, fixing broken legs, saving a sheep torn up by a dog, sewing up a prolapsed vagina to name just some of the acquired skills-I learned so much about animals and my place as a human amongst animals by raising sheep. It helped me clearly understand my specific place in the Nature, on Earth. Having been a vegetarian for seven years before moving to the farm, it helped me sort out the conflict of loving animals, and eating some. Some of you might not understand that, some of you might be angered by that...but you are you and I am me and I am grateful I got to live on a farm and watch Nature-not control it or demand it fit my morals-and decide what was right for me and our farm. Some people never get the chance to live emerged in Nature and land so I am grateful for that time there as a shepherdess. I don't miss lambing though or all that went with it, it was a beautiful time of my life, and now I have shifted ever so slightly to be exactly where I am meant to be, still in Nature amongst animals, and elders–but I come with those years of experiences that shaped me.

I love this writing and your thoughts. Accepting and embracing what is.There seems so very little anxiety or anger in it. Just acceptance. It teaches me, helps me to let go my need to try to control.