Teddy thrives as an ambassador of love 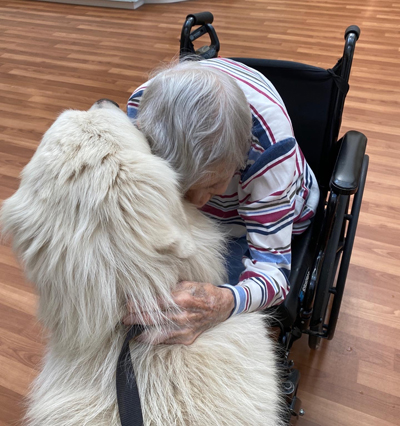 I took Teddy over to see our elder friends at Cove's yesterday. I opted not to take him on visits in summer since it is so hot. So we were happy to be out together again. He was the same old calm, loving guy as the last time...complete with drool which 99% of the residents find amusing and we get chuckles.  I know he was happy to go with me again. When I leave the farm he always looks at me so longingly, it's heartbreaking. So he will be out and about with me now through Spring. And I imagine he will be great in the upcoming Lovely Mobile.

It was a really nice visit. There is something about Teddy, as there was with White Dog, that attracts people to touch him. Perhaps it is his size, his fur, his bear like look...but he is a magnet for touch.

Just as White Dog would say, "Touch me," with his eyes, so does Teddy. Although Teddy also uses his nose to push your hand if you stop petting him. He got to visit with several new residents-some nice photos over on the IG page. One of the residents took my breath away, she looked so much like my mother who died at 87 in 2013. This resident was new and she was 101 and had the same haircut and look, the same smile too. When she was done visiting, she rolled her wheelchair over and starting pruning the petunias...puttering away all by herself–that too just reminded me so much of my mother. As someone noted, they come to us when we need them. Upon arriving home, there was a dove in the garden that flew out as I walked in–another visit from my mother. I think she was saying, "Do I really look 101?"

Teddy got to bring so much joy to one of the regulars there, a woman with advanced ALS who can't talk but smiles a lot when she is happy-and Teddy clearly made her so happy.

I still see Teddy as Teddy, not another version of White Dog. And he is very different that White Dog. But I do still believe White Dog helped bring us Teddy. White Dog had just started participating in elder visits here at the farm and he was a natural. Soon after, we discovered the bone cancer in his leg. He lived another 6 months and still did visits here and it was so beautiful and heartbreaking. I felt so...angry-sad that just like Birdie, and Opie, he was so well suited for this work, and Nature stepped in. Maybe the three of them were needed more elsewhere. But I told White Dog this, that it was not fair and I was mad the cancer came for him-we were a team. I really know White Dog knew I was going to be heartbroken when he did have to leave at some point, and he got the ball rolling for Teddy to find us.

The visits at Cove's always have a mix of laughter and sadness. One woman was there for rehab after a fall. She wanted to go back to her home and hoped too. But she was grappling with how to continue to live on her own there, even with help three days a week. She was sharp as a tack. No matter how we want to age, it is only so much in our control. 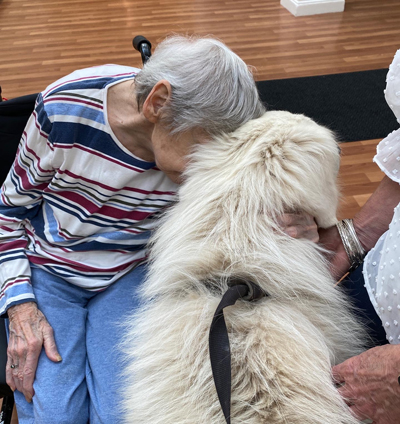 Posted by Katherine Dunn/Apifera Farm at 11:29 AM