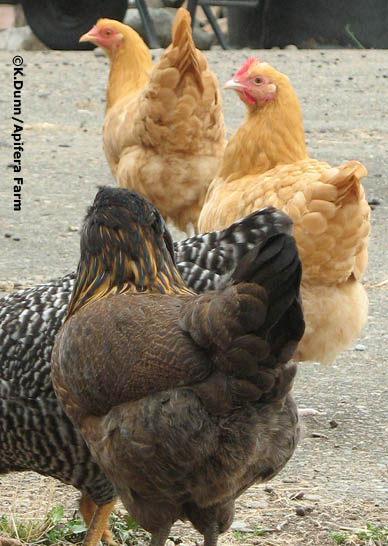 The three Buff Orpingtons of Apifera are lovely, calm and are much like me with their strawberry blonde tresses and fair skin tones. I never knew I'd have so much in common with a chicken.

I immediately named the leader of three "Golda" after Golda Meir. While I don't see Golda the chicken as being too political, she is very adept at hanging out with all the different chicken varieties in the flock, which I think is very Golda of her - nation building at it's finest.

I also named her Golda because she is typically the first hen out of the roost in the morning, and I just started saying, "Well, good morning Goldie Golda Gilda", 'cause it just sounded like morning sunshine. You can tell Golda because she has the tiniest 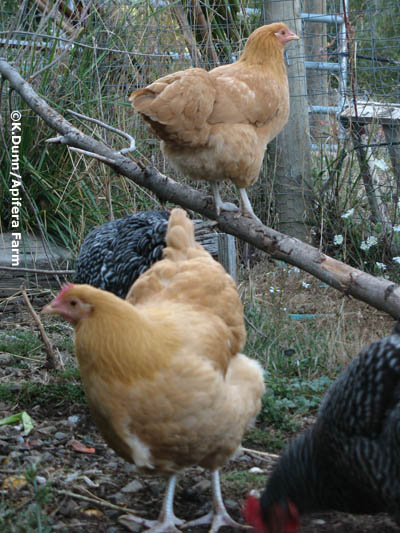 comb of the three. I named the other two Florence Nightingale and May Sarton. One a nurse and the other a writer, and a lesbian to boot. That is May was a lesbian, not Florence to my knowledge. Wouldn't want to rewrite history by mistake. I figure hens are very nurse like as they tend to those little eggs, and like a writer, they peck and scratch for the best combination of grit and nourishment. 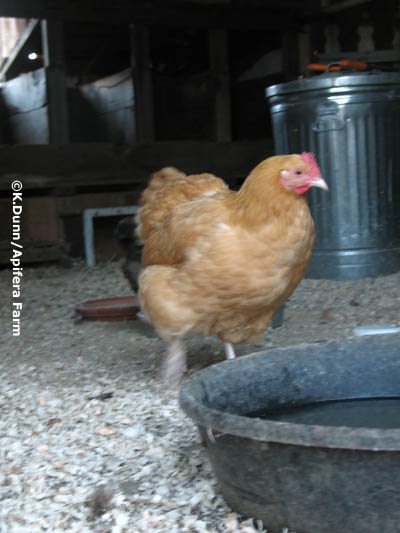 Now, there is one more hen, but she is the shyest of the new ladies. An Aracuana [like Edmonia, Madeleine Albright and Mabel], she laid the first green egg for us a few weeks ago. Only two of the new hens are laying yet, so having it be a green egg was so special. And who would have appreciated such a fine egg more than Alice Waters? So I named her Alice Waters.

And those are the new chickens of Apifera. They accept poetry and prose from all ages, as they find it stimulates their souls, thus creating better flavored eggs.
Posted by Katherine Dunn/Apifera Farm at 3:57 PM

Oh what pretty girls you have. I love watching chickens - when we had a bigger flock & a rooster, he would take the girls out for a walk in the pasture - they'd go single file, clucking along - until he found a special bug or something, when he'd stop and call them all to his side. It was a crack-up to watch. :-) T.

They are all beautiful.