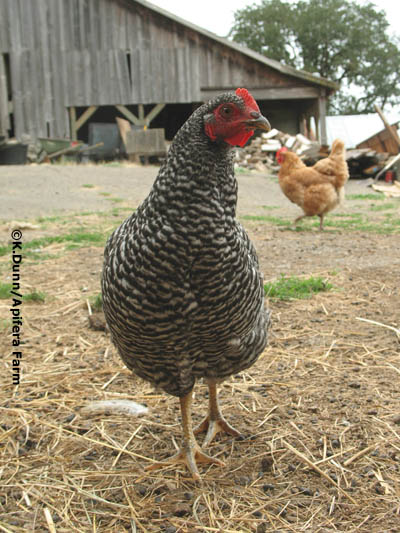 My beloved Barred Rocks, oh how I so love my three Barred Rocks. The personalities of these three ladies is calm, polite, inquisitive, friendly, and welcoming. I have always loved the speckled looking chickens, with the standout red combs. So vintage, don't you think.

In keeping with the theme of naming the new hens after strong women, I have named them The Three Janes. Jane Morrison, for my mother; Jane Anne Lyman, for my mother in law Anne; and Lady Jane, who I know nothing about but I needed another Jane. When I told my mother I had named a chicken after her, she reacted as I knew she would- 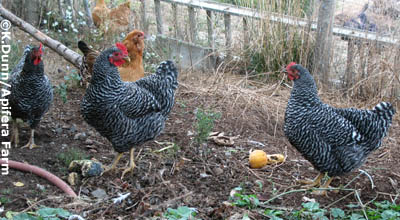 indifferently, not insulted, but not honored. The naming of my favorite chicken after my mother was more for me I think. We are very different, my mother and I. I take solace in chickens, she sees them as possible carriers of disease, something that was drummed into her little farm head when she was growing up in the country in North Dakota. On the other hand, I feel quite strongly that my hen Jane is honored to be named after my mother Jane, so that's nice. You can't please everybody.

Now, I can share this with you, but Jane Morrison the chicken, seen in the top picture, is my favorite hen. She is the first hen, besides my dearly departed and much loved Ward Schumacher the rooster, who likes to be held. In fact, she actually stands at my feet and waits for me. When I hold her, she curls her neck in like a swan, and leans it into my chest. It's endearing to have a chicken act like a newborn. Now, now, 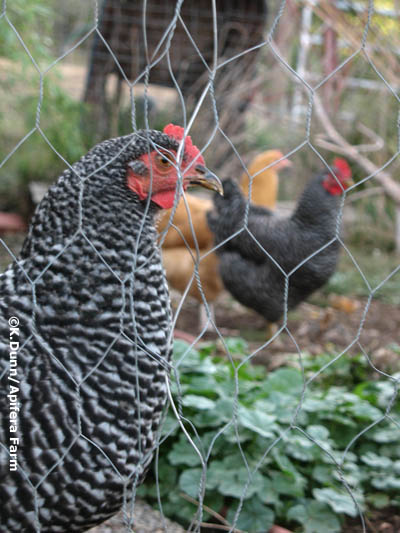 I know she's a chicken. No, I do not want a baby. And please don't write and tell me that I'm yearning for more outward demonstrations of love from my real mother, so I named a chicken after her and now enjoy hugging the chicken. My mother gives me all sorts of love, it's just in short sentence spurts, or appliances I don't really need, but gratefully accept and always use. 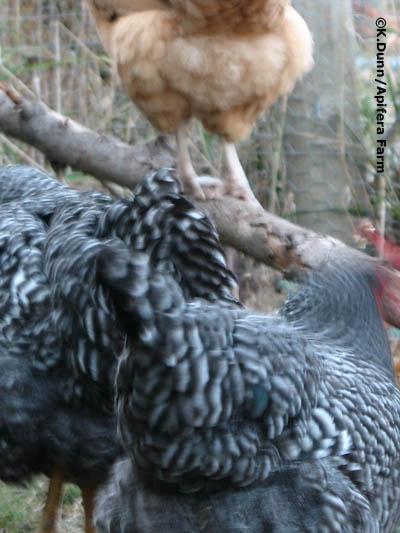 No, it's just that Jane Morrison the chicken is so nice, and she likes me. And I like her. Even though our daily huggings led me to come down with another ongoing case of poison oak all around my neck and chin. This outburst of poison oak followed last month's bout when I was hugging the donkeys and got it from them.

"You can't hug the donkeys until I can get rid of that poison oak..." the dirt farmer said to me.

I assured him I would refrain from hugging the donkeys - which is very difficult, but I did. But that didn't keep me from hugging that chicken. He now says I shouldn't hug my chicken. Well, who am I supposed to hug?

Anyway, Jane Morrison has the smaller comb of the Three Janes, that's how you know it's her. And she's the one at my feet, that's the other way you know it's her.
Posted by Katherine Dunn/Apifera Farm at 6:22 PM

You are a delight.

I just love this naming of chickens, Katherine, it's so...,I don't know..., poetic?, and your reasons are wonderful.You're having fun with this, aren't you?

By the way, I have always liked Jacqueline; it was my mother's name. She just left this world last month and she would have been honored if you were to name one of your chickens after her. She loved chickens and was raised on a farm in the Napa Valley.
Mom always wanted to be an opera singer so the hen should be kind of a diva.
Please ignore the offer if you already have all the names picked out. It's just another idea.

Well, I do agree they are vintage and oh so charming. I, personally, have always wanted chickens, but alas never lived anywhere they would like to be. You might want to re-read Lady Chatterley's Lover, to get the full gist of who/what Lady Jane is. (giggle) BTW how's the book comin'? I can't wait!

Can you hear me laughing all the way over there? So sweet that Jane Morrison likes to be held and hugged. (Not so sweet about the poison oak.) All three Janes are beautiful.

Sycamore- it's nice to be delightful to someone!

FArmlady- I'm sorry for the loss of your mother. I lost my Dad a year+ ago, and it's odd and strange and sureal to lose a parent [for me anyway]...so grace to Jacqueline. And I love that name. Perhaps from time to time I will say, "Good Morning Lady Jane Jacqueline> Shall we go to the opera today? Yes, let's!"

Now Suzen, you sent me on a search. I had forgotten about Lady Jane in that book - I read it in 8th grade...a lady of the evening? Well I was thinking of Lady Jane Grey, Queen for 8 days after Edward died who was son of Henry [I think that's right}. I think any queen of years gone would have had a horrible life,so must have had strength in many ways? Either way, call girl or queen, Lady Jane it is.

Cathy- giggling, yes, I hear it!