Celebrate the man in the rubber suit 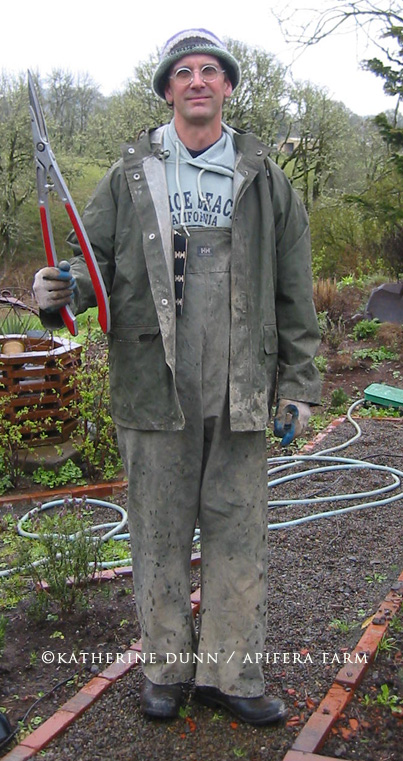 Now that the birthday party for Goose is past, I am beginning my preparations for a special dinner for Martyn tonight, the one and only Dirt Farmer. This is a person that still looks hot to me in a rubber suit, even though I'm usually to tired or distracted to act on any sudden impulses- but a girl can take notice. He would die if he knew I said that-online-but it is true.

Martyn is the best mate and friend I could have found that first day after I landed in Oregon, alone, with a blind terrier and a gassy pug. He was the first person I met, and the first one I'd marry. He matches my over sensitivity with calm and humor, lifts me up in sadness at the loss of mother or old goat. He cheers me on with my hopes-even when they seem about to fail.

Most importantly, he is crucial to keeping Apifera standing. While I use hay twine as my main product to secure everything from fence to gate, Martyn is handy with all power tools- most of which 'm banned from using.

He gives me companionship by the fire-and always makes me laugh. He cooks for me like I am visiting from a far off country, and helps me with the most mundane tasks, and many on the spur of the moment-

"Quick! Grab a board, the pigs found a hole in the fence!"

I once heard a very old man-in his 90's- that had lost his wife of 50 years. He said he had his work which he loved, but that 'life just wasn't as fun any more." Tat broke my heart for him. For that is how I imagine it would be, what Apifera would be, without The Dirt Farmer.

So I'll squeeze him a lot tonight and stuff him with baked chicken-smothered in onions and white wine-and toast to life together.

Want to honor the Dirt Farmer on his birthday? Go make a pledge to the current Kickstarter project -after all it is our love story that the book is partially about.

Email ThisBlogThis!Share to TwitterShare to FacebookShare to Pinterest
Labels: The Dirt Farmer

LOL. It's the little things.