White Dog is now of Apifera 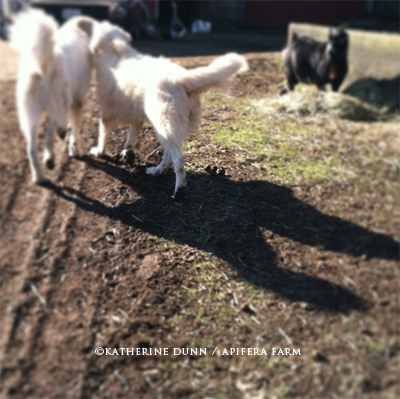 I brought White Dog and Marcella back from the vet this afternoon. I took them in yesterday early morning for his neutering and her spay. I was pleasantly surprised at how well they did going in the car and being in the exam room. Marcella actually lay down and napped. White Dog was not at all fearful and was a big hit. We opted to also put a chip in him, so he is officially of Apifera now. And his name is Benedetto which means "Blessed". If you've been reading along, the magical way he appeared out of nowhere is seen here as a gift, and I will always feel that way about him.

I hated leaving them at the vet. The look inside Benedetto's eyes as I looked deeply into them and said, "Trust me,", I won't forget it. Marcella was in a kennel directly across from him and she seemed very calm when I left. But upon arriving to pick her up, even though her surgery went well, she was not herself. Her vitals are fine, it is just her way. I know at her first season she went into a real moody period, like she hurt and didn't want any activity around her. She does this if she has a wound too. She takes to the barn to a spot that is not of the norm for her, and growls at anyone who comes close, even little Earnest...or me. I've learned how to deal with it. I growl back-if I have to move her or medicate her. It has worked so far-I simply growl until she stops, then she rolls and goes submissive.

But tonight when I got them home, I was doing feedings and Benedetto was fine. He ate well, checked everyone out, roamed a bit and was really happy. Marcella was not feeling herself and hung out in the sun for some time with the other gang. She even snapped at poor Earnest who was just happy to see her. But I'm sure her tummy area feels funny. I put Benedetto in other goat paddock so he wouldn't bother her. At feedings, I always feed Marcella and The Head Troll in the hay barn, and Benedetto stays outside and eats, otherwise it would be a fight. But Marcella didn't eat-that doesn't concern me at this time. It is normal for her. When I went to get her pills in her, I knew it was going to be risky. She had been glad to see me, but she just felt lousy, and let us all know. So I showed her the pills and she even tried eating them on her own, which didn't work. So I went to show her the bottle, etc, went real slow, and at some point, she just grabbed onto my upper palm/hand, and held on, tooth deeply embedded. Ouch. Hurt like hell. I knew not to pull, as it would only entice her to hang on harder, and she eventually let go, but I have a very big ripped hole in my hand. I disciplined her by pinning her down, using a broom, until she went submissive for me. I then left her, and did chores. She eventually came outside and came to me and dropped and went submissive. We sat for a long time together. I looked deep into those eyes, and I told her I didn't always understand her reactions, but I was trying. She licked my wound, she loves blood, and always licks the wounds of any animal. And then she let me put the pills in her mouth and I helped her swallow.

After she had bit me and I was disciplining her by holding her down [this lasted about 10 seconds], Benedetto was on the other side of the gate, concerned, but not aggressive. I went out with him and spent time with him and assured and praised him a lot. He is a wonderful dog. He is going to help me with Marcella, I really believe this.

I have never had a dog bite before. Not even with all the terriers we've had, at least not a deep, penetrating one from a guard dog. I know several Maremma people who have worked with the breed for years and I know this is not uncommon, it is part of learning this unique breed. These dogs are not for sissies, nor are they family pet material. It kills me to see people casually talk about getting one of these guys-like they think they can just plop one in a field and it will be happy, or worse, in the backyard in the city. They need guidance and boundaries like any of us. And they need a clear job. I haven't quite figured Marcella's actions out. She was tolerating me petting her in a soothing way, and I was not coming at her face quickly which can be a threat. I had spent about 40 minutes letting them reaclimate in the barnyard-they hadn't been together for 2 days- before attempting to give her the pills. Benedetto let me put them in and push them back, zippidity do-da, finetto.

I am just happy they are home. White Dog came to us, somehow, I just hope he stays. I can only to my best for him. In the next couple months I will spend a lot of time walking the pastures and fields with him, with the flock. He seems so happy and I do feel even now in the barnyard with so many animals, he feels he has more of a purpose than perhaps he had elsewhere. A purpose is the reason he will bond and stay with us. 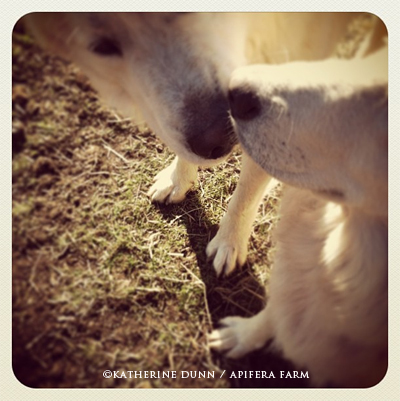 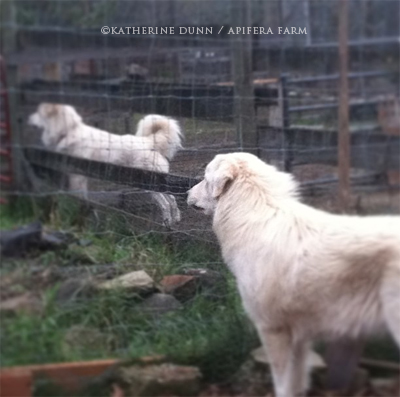 It takes a lot of patience to understand animals. You should have seen my this year with Miss Alpha Rat Sparklepants. Never been bitten so much in all my days. But I know a lot more about rat behavior now. It was a rough few months. Patient has won out, although I doubt I am out of the woods forever.

love your stories...you are doing right by your dogs....Benneditto (not sure on that spelling?) is showing you alot! Looking forward to MORE!

such a blessing.
you need "white dog" benedetto....
and marcella....your sweet girl....of course she'll come around, after healing. abdominal surgery is no walk in the park, and, she lost her female parts, so her body is most likely telling her emotions about it all....

love you, katherine of apifera.
it's so good to know you.

I'm betting Marcella felt really out-of-sorts which resulted in her lashing out. I'm loving your updates so much...and I'm happy Benedetto seems to be settling in to stay.

Hope your wound is healing. I have had a similar experience with two dogs of different temperaments, yet so compatible. It's a shock to the system, to be bitten by your special dog.

Thanks for checking in everyone! Marcella was 50% better this morning, still not herself, but eating and took her pills. She is showing Benedetto is not ok to do certain things, he caught on fast. My wound is ok, I think I got to it fast enough, and she was full of antibiotics!

And Sherri B, your book is on the way!

White dog sounds like a calming guide and he is beautiful. my yoga teacher's dog bit me once when he had an ear infection no one mentioned. it did hurt like hell and it was a quick bite. i cannot imagine that holding on and how much that must hurt. Hope everyone heals well! xox