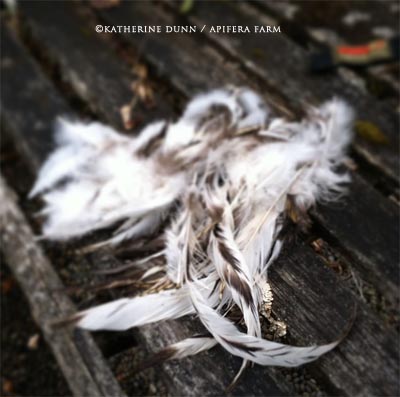 This morning I found many rooster feathers scattered and floating out behind Old Barn. I immediately assumed that Uno had been killed, as they were either his feathers or Papa Roo's, and I had just seen Papa. Francis is an Aracuana so I knew they weren't his feathers.

I felt horribly. I have been in a chicken transition for awhile now, which you know if you follow along-surprise clutches, new chicks, another surprise hatching last week-and then there is the shifting forces of the three roosters Francis, Uno and Papa Roo.

I feel great loyalty to Papa since he was here first and has always been a gentleman. He is a Bantie and is well over ten. When Francis came on the scene, there was not a lot of fighting, but within about a year or two, it was clear that some scuffles had occurred, and Papa was ousted out from the hen house, or chose to be. He took five hens with him and they began roosting on a ledge in Old Barn, near Rosie. One of these hens was the black Bantie who has been a master at hiding eggs and creating her own mini chicken factory.

I have been putting Uno in with the Francis gang in the coop, along with the new chicks. It's been working out okay. In the meantime, my last remaining Buff Orpington has taken to the goat barn, alone, staying there all by herself for the last four weeks. I assumed she was on her way out, but she keeps on greeting me every morning.

So there is a bit of chicken chaos at Apifera right now.

And then this morning, the rooster feathers. Clearly something had fought a rooster and appeared to have won, since the feathers stretched for about 40 feet and ended up going out a fence into the woods.

So, like I said, I felt horribly about Uno. I failed him. But, didn't I put him in the coop last night, I'm sure of it.

I went to the coop, and there was Uno, alive as I was.

I returned to look over Papa Roo and noticed that he only had one hen with him, another black bantie. But there was no Chicken Named Dog-a large white hen who has been here some time. She is not a setter so I started feeling she must have been killed. And there below their roost spot was a dead Aracuana, who had been dead for some time, clearly from a natural death. I hadn't seen her body because she was lying under a board.

I noticed Papa seemed a bit off, 'with a coma look'. then I realized his tail feathers were really plucked, and under his comb was some blood.

He must have been in a very big scuffle, or was dragged out by something, but fought it off. This is intriguing. A raccoon could easily kill him, even though Papa has big talons. I begin to wonder if he was defending Chicken Named Dog, but, there was not one white hen feather to be found. I will wait a day before I know she is clearly gone, she might be hiding due to stress, but...doubtful.

I am also missing Ida, or Crazy Ida as I call her.

Marcella did not bark last night and if it had been a bobcat she would have. A raccoon could have come through Old Barn first, but from all the feathers, it seems it must have been a good struggle.

Even though papa has been surviving in Old Barn for months now, I am going to put him and his Bantie hen in Eleanor's stall tonight. He will have a job to do-eat the maggots on the poop to help keep flies down. Then when we get the new wing of the chicken hut done, he can live there, free from the other roosters.

It's eerie though. Just seems strange he could fight off a predator. Especially one that could have taken Chicken Named Dog, since she is a big, healthy hen. But as The Head Troll once said,

Footnote {6:00 post meridian} Chicken Named Dog appeared again, unscathed. After revisiting the feather trail tonight, I found racoon droppings near the final clump of Papa's feathers. Perhaps it was a youngster inexperienced with making a kill. It seems remarkable his feather trail was that long, and he got out alive. To be continued.
Posted by Katherine Dunn/Apifera Farm at 12:41 PM