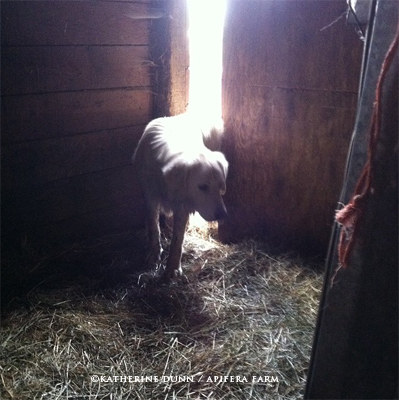 Ever since Friday, when Eleanor was popping out piglets, Marcella has been itching to get into the nursery room and introduce herself. The stall where the piglets were born is a sacred one–it is where many of the elder Misfits are brought to heal, or die. It is where I take a sick animal to keep them calm away from barnyard rough play. This is the stall that Old Man Guinnias had his last breath in, where Earnest lay so sick I was worried I was losing him. On it's straw bedding I held Floyd's head in my lap as we put him to sleep and roosters have come here to back into the dark interior walls, hiding in the cobwebbed corners from the another roosters who have taken a step up in the flock pecking order. It is the place that Rosie the grumpy pig first made her bed along side Stevie the crippled goat. Here in this 14" x 14" hallowed ground, I held Boone's head and learned all about teeth floating, I learned to give my first equine and sheep shots and other shepherdly lessons from my vets. Up above, every spring, the same bird's nest is full of baby swallows.

If I had to be confined in a stall of my choice, it would be this one, for I could hear the goings on of the barnyard, see the sky through the window and hear the animals munching.

Marcella is interested in anything new that comes along into her barnyard, much more so then Benedetto, so it is understandable that when she smelled birth, heard the different grunts from within the stall, she was on a mission to get in there. This is another reason this stall is best suited for birthing or care taking-it is very secure.

Since Eleanor is proving to be a calm and good mother, I allowed Marcella into the nursery last night to meet the piglets. They were asleep in their little row. I could lie and tell some of you non pig people that I trained them to do this, like little Von Trapps, making them line up to an individual whistle. But alas, they do this all on their own, daily and nightly. This is their preferred nap position in the normal temps. But they often pile on top of one another, yes, in a pig pile.

Marcella strode in, as you can see in the photo, sniffed Eleanor, and came into the stall with me. I would never have let her do this on the birth day, or even within days of birth, just in case the smell of after birth was still evident. Sometimes the guard dogs will lick the new borns as they are prone to lick wounds of their herd, meaning no harm, but they over do it and tragedy can follow.

Marcella was interested, but not overly so, which was good. We will begin doing this routinely. Within a week or two, I will move mama and piglets down to the lower Misfit Village where they will have room outside and a stall. At ten weeks, they will be weaned. Marcella will then be able to come down and really check them out if needed but there will be no problem. Pigs are tough little creatures. They are already poking and prodding one another, and the mothers do the same. The pig's nose has a entire language to it-different nose shoves can take on varied levels of meanings, anything from a casual,

Hey, that's my food, bug off

I said NO, beat it NOW before I bite your neck

I am learning each piglet. They are all different markings, unlike the last two litters from Pearl and Doris who are Guinea Hogs. I feel a different relationship with these piglets, for sure. The runt is the least attractive of the bunch but I've been giving him special attention. There is an Earnest junior, and some beautiful girls too. I wonder if Marcella will form any relationship with the junior Earnest? Doubtful, since they will be in a lower paddock.

Marcella left the stall and went on with her routine-a bit of a romp with Benedetto, helping me get water to everyone, a lay down here and there, and then she laid down by the stall door, looking out on the barnyard as night fell. 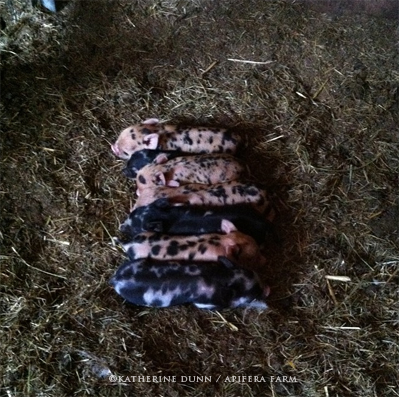 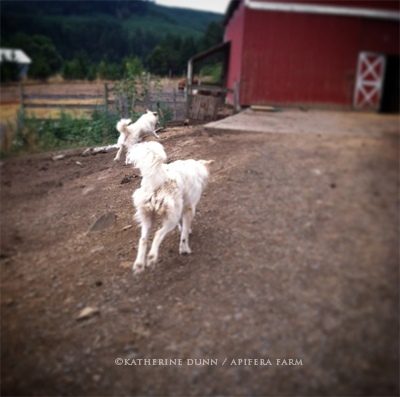