Sometimes you get pecked on 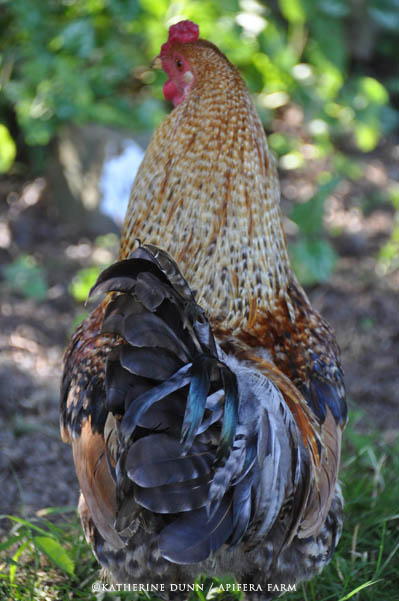 Well, I still have a husband...although he is contemplating pulling up his tomato plants and leaving. See, I was truly minding my own business last night and was on my way to the veggie garden to put up yet more chicken wire around the now blossoming tomato plants-because occasionally we still have a chicken or two go in there and peck the ripe tomatoes. It drives us nuts but especially Martyn. I have tried to Fort Knox it, but with each chicken intruder, Martyn gets more desperate. So, back to last night, my plan to help the tomatoes was sidetracked by a ....chirp.

There it was, a chick, at the donkey paddock gate.

Not again, I thought. I had been keeping my eyes peeled in the last few weeks for my missing Black Bantie hen, the same hen that gave me 7 new surprise chicks two months ago [after I'd brought home new chicks, like I said, she didn't get the memo].

I picked the chick up and went to a spot used by this bantie before to hide eggs-the same spot I had checked a few days earlier. There she was, sitting amongst broken egg shells. I ran to get a crate and flashlight and scooped mom and babies up. Except one little chick got out and I couldn't find her.

Martyn arrived home. Now, even though I didn't want, or need, more chicks, new life is always rather exciting. But I kept my lips sealed. I should point out I never keep secrets from Martyn. I let him get one beer in his belly and then told him the good news first:

"I found that darn Bantie hen!"

He took a sip of beer.

He then went into a monologue about his tomatoes. I explained these chicks had not seen a tomato let alone pecked one. He pointed out I had to do something about having so many chicks-and I reminded him I am not a chicken and I did not lay the eggs, nor was I fertilized by a rooster.

Martyn never yells. I think he has lost his temper with me twice in our marriage. He might scream all the way down the driveway, but I can't say for sure.

I got some more beer in him and we talked about other stuff. But then I hear a 'peeping". It was not a baby bird. Chicks that are lost sound different. I crept back out to the spot where I had found the chicks, and there was the one little fluff ball that had gotten away from me. I scooped her up and introduced her to Martyn. He was pleasantly polite.

This morning Martyn got up early as usual and kissed me good-bye for work. I was relieved to see that the tomatoes were still planted in the vegetable garden.

I'm pretty sure he will come home tonight.
Posted by Katherine Dunn/Apifera Farm at 4:11 PM

He's a good man, that Martyn.