Saying goodbye to a chicken, hello to the lupine 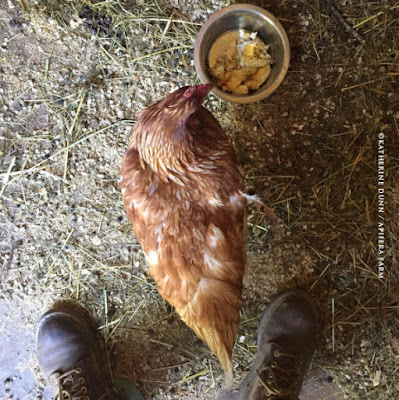 I lost one of the hens last night. She was only a year or so and one day ago she took to laying about, not eating. I suspected a bound egg, from her appearance and behavior. I tried the usual olive oil drip and lubricating the vent, and I made her a scrambled egg-yes, I give scrambled eggs to my hens on certain occasions for protein, they love it. Ad no, I do not think it is canabalistic.

So last night I decided to put her back in the coop with the girls. She wasn't horribly weak and was walking a little, I thought she might work through it. But I could feel crunches when I gently massaged her sides.

She was gone this morning. The hens had been busy scratching for bugs and had partially covered her body. I became very brave and tried to do an autopsy of sorts, curious if I would find egg shells. But it got messy, and I buried her.

I hate losing chickens. But as an old farmer told me years ago,

"If you want chickens, you will lose chickens."

I had named her Gracie because she was the only Sexlink of the Buff Orpingtons flock, The Secret Sisters. Gracie was much more personal than the flock of Buffs. My old Buffs were so friendly, this group, stand offish and a bit flighty for Buffs. So I was sad to say goodbye to Gracie.

To juxtapose the death of a friend who gave us beautiful food-the world's most perfect food,eggs-I enjoyed the Lupine on the drive. One must always look for a juxtaposition to a sad event to survive the human condition. 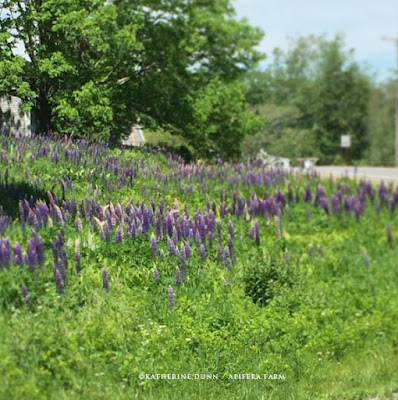 Posted by Katherine Dunn/Apifera Farm at 7:17 AM

Sorry for the loss of your sweet hen. The lupine is a perfect consolation... so wild and beautiful

Chickens do tend to die for no apparent reason sometimes. I remember once finding one on the floor of the coop one morning, as if she had simply fallen off the roost. She'd been laying fine and acting fine the days before. One simply never knows. The lupines are lovely - we have many of them on the roadsides here and they are such a lovely harbinger of early summer!