Do not deduct from my life, she said 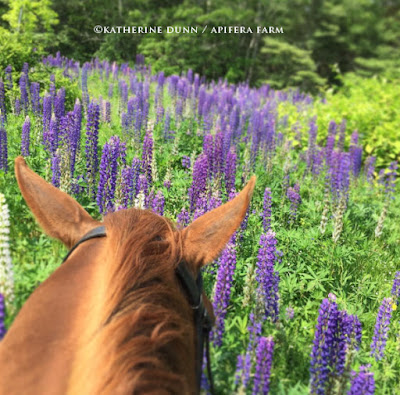 I finally got to have a long ride with Boone yesterday. We have not ridden together since October and in Oregon I rode all winter usually 2x a week since I had easy access to a barn and trails, and no icy winters. So it was a long time coming. I wondered if even at 19 if my noble steed might be frisky but he was just fine, and I can tell enjoyed himself. Before anything else, Boone is a trail horse.

The wind was consistently blowing which was perfect for an 80 degree day and heat-hating rider, and fly-hating horse. Boone is really sensitive to bugs so the wind was a pleasant addition to our ride. And we found some new paths to take thanks to a nearby property with horses that made some suggestions. I felt like we were on an adventure and I thought how far we had come since landing in Maine. I felt sturdy and confidant on the ride yesterday, mainly because I am reforming my identity here with new people and terrain, and that takes time.

I was thinking of my old friend Joanne, who died this year at age 85. She was my riding mentor and buddy and we rode right up until we left for Maine. She was the first person I thought of when I knew we were moving, and how I did not want to leave her, or our rides together. When she died I just was so sad even though she had a long life but a car accident took her in the end, a guy ran into her as she crossed a walkway at the hospital and she went into coma at some point, dying at home.

Joanne and I use to talk about aging, and how she did not like how her body was putting limitations on her, but her mind was clear. But she rode 2-3 times a week. She also talked about how others would try to put limitations on her as she aged. I saw this happen to my parents, especially my father who had many physical issues, and one by one he had to give up things like driving, smoking his pipe, walking the dog...things he loved. I had a recent conversation with a woman in her late eighties who wants to get another dog because her beloved pug died, but some think she should not because they think it would be unfair to the dog since she might not be around long. This woman said something that really stuck me: she said she did not like it when others wanted to take things away from her, to deduct things from her life.

I think this is the biggest challenge we face as we age-being deducted, being told we must conform and shrink with age, rather than to keep evolving into things we can handle physically.

I guess there are situations where an 85+ year old should not ride a horse, or buy another dog-but that is up to that person assuming they are of sound mind.
I thought of Joanne so many times on my ride, and felt she had prodded me to get back in the saddle yesterday even though it is a super busy week. I talked to her a lot. And I thought of how glad I was that she had not been forced or felt pressure to deduct riding from her life.

So to all the merging elders, and current elders, I say we must strive to add things into life, not shrink away. When we shrink back, and deduct, then it will be our time. I know at some point, the body and mind deduct on their own, but to be forced to give up things because someone deems it necessary is an unfair stance to put on an elder. Perhaps limitations mean you can't have a dog, or a horse, but perhaps there are solutions that could bring joy to the elder, an addition in their life.

That's why I want to work with the animals and elders in get togethers-it is an addition to their day, not a deduction.

Posted by Katherine Dunn/Apifera Farm at 7:12 AM

I am an elder and like your motto of "don't deduct from my life". Your friend Joanne sounds like a treasure and how cool she rode right up to the end. I just adopted a shelter dog and hope we have many more years together. Nice you and Boone had a breeze.

That's so great you have a new dog!

Reading about your friend riding at her age made me feel better. I just began riding and am turning 60.