Walking the horse and my pants still fit 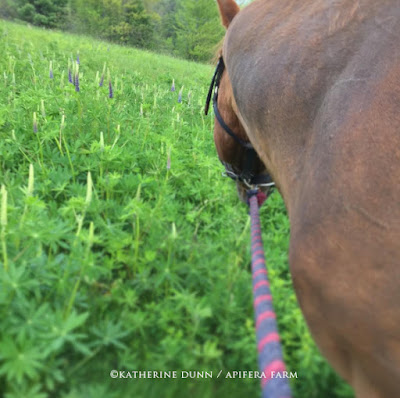 I took Boone out this afternoon for our first light walk of the season–and I do mean walk, as I decided to just walk side by side with him rather than riding him.

First I spent an hour or more grooming his mane and tail which I sadly neglected for many months and there were lots of wind knots. But some cheap conditioner from the store solved that. He is shedding out leaving him with his new nude look until fresh hair grows in, leaving him almost dark brown in areas. He came out of winter a good weight.

It felt so good to be with him again. I opted to work on the ground with him since we're both a bit rusty. I used to ride 2x a week but that didn't happen here and doubt it will with winter. I have no desire to winter board him just so I can ride in an arena during icy months. I had a great thing in Oregon with my friend, Joanne, and her gorgeous land and arena, and companionship. I missed her today, but I thought she was probably smiling down on me from somewhere.

I don't do round pen work any more with Boone, just not needed and he and I are both bored quickly with it. But we have a flat area of sand on the front drive so I worked him there for about 15 minutes just to see his mood. Man, he obeyed everything pretty much and was very attentive to me. When I first got him, he would do 30 minutes with barely looking in to me!

So I decided, let's just go for a walk down to the bay. Woman and horse, side by side, walking on the road. I got some looks. It's a small town, people talk–I mean they really talk here, like an episode of "Murder She Wrote" or "Father Brown". We get a kick out of it-but we wonder what they say about us. Something like,

"That woman, you know the one we saw walking a llama once, and then the donkey, and that tiny goat, she was walking a horse on the county road today. Kind of odd."

The lupine are just starting. They are beautiful and just to be able to stand near the sea with my horse, smell his wet coat of shedding hair, and walk side by side with him was so nice. I stop, he stops, one foot forward, one horse hoove forward...and so it goes.We saw our favorite little shack near the bay and I took a photo of it-it is images like that when I go,

It was a good beginning for me and Boone.

And my riding pants still fit, this is the icing on the cake for the day. 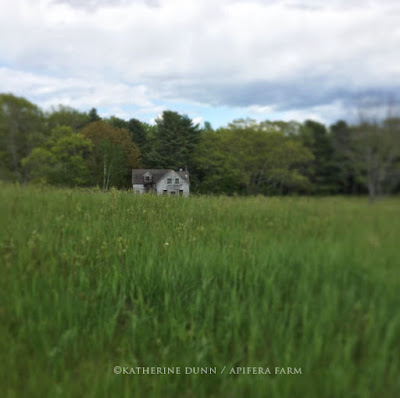 Email ThisBlogThis!Share to TwitterShare to FacebookShare to Pinterest
Labels: Maine, Rides with Boone