Photobombed by a piglet and Earnest gets an edible fort 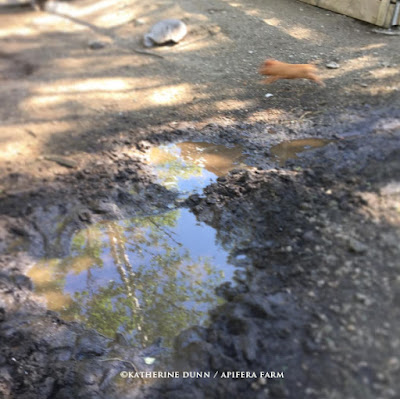 I was admiring the already growing pig pool, noticing that Eleanor had started her pool and then the piglets were creating another above it, almost creating a waterfall effect from upper to lower. In time, that pool will hold all nine piglets. I won't let you down and will get a picture of it as summer heats come on. If you don't have pigs, I will tell you that if you give them even drippings of water, by a faucet for example, they will make a wallow in no time. They use their strong snouts to dig the dirt. It is really fun to watch, and also makes you understand quickly the challenges of containing pigs due to those strong noses. They can also lift gates, or bend them if they are securely intact.

I was taking a photo of it and a flying bat came across my lens. They are like little bats right now, flying around the paddock at ease, stopping to sniff, then flying the other direction. When they get going all it once it's like a swarm of polk-a-dot flies.

There was great excitement in the barnyard yesterday morning, or was it Sunday? I came out to hear quite a bit of conversation,

"I don't know, maybe she planned it this way?" asked Goose.

"It's a fabulous gift, a tree fort over my water hole, and edible too," said Earnest.

I looked out to see a large limb had cracked off the nearby maple. Thankfully nobody was hurt. Unfortunately there is another larger limb that is dead, still upright and we will have to get help taking it down, sooner than later. I'm afraid it could easily pierce the barn, or take down the coop roof.

But for now, I imagine Earnest lying under his edible tree fort, sitting in his pig pool, nibbling on maple leaves as he cools his body in the heat. 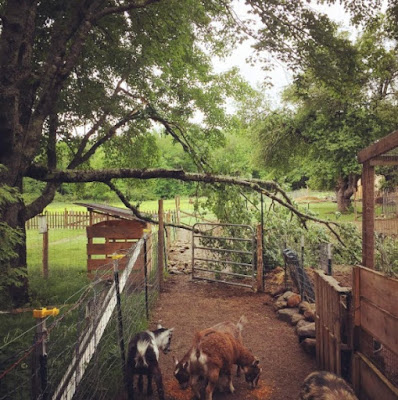 Posted by Katherine Dunn/Apifera Farm at 8:01 AM

Email ThisBlogThis!Share to TwitterShare to FacebookShare to Pinterest
Labels: Life on the farm, Pigs

Yummy yummy, an edible fort, and a piglet who appears to be flying. I think he wants you to paint him.