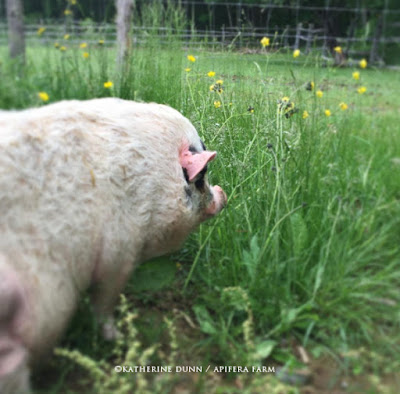 I came upon Rosie this morning outside her sleeping suite visiting the grasses and  Ranunculus flowers nearby. When Rosie arrived at the old Apifera, she would roam a bit more, biting off grass blades and napping in the sun. But over time, her grumpiness grew and she preferred her own company, especially after Eleanor arrived. Even Stevie the Kissing Goat didn't seem to be able to entice her out of Old Barn, where she retreated to at one point, living for the last two years of our time there in  a private suite. Visiting chickens were allowed to roost near her, and the sounds and faces of passing sheep and donkeys on the other side of the fence did not bother her.

So each time I find her outside in her private paddock, it makes me happy.

"Rrumpf guru aaaa hrumph," she says. Sometimes she is calmed by having the backs of her ears rubbed, as she was today.

Rosie has also been found lying on the fence line that is shared on the other side by Earnest and the goats. I find him lying there too and it's heartening to see she seems to finally understand,

I would love to let Earnest in with her, but I just think it could be a disaster. He has tusks, number one, and he is much heavier and stronger than Rosie who has a weak hind end. If Earnest decided, as he probably would, that love making was needed, I'm afraid he could hurt her already weak hind end. So their get-togethers are like those of prison inmates, meeting at a designated dividing fence where they can touch noses. I can not imagine the pig squeals she would emit if their relationship was consummated. Fortunately, she was spayed before we adopted her, so should Earnest someday make a valiant effort to be with his grumpy cougar girlfriend, there would not be little grumpy Rosies in three months.

Martyn and I have laughed at this thought-Rosie with children. Would she eat them? We imagined them running around like gremlins, complete with horns.

There is only one Rosie and there will never be another one....perhaps this is good. But I've become very fond her royal highness, she and I have learned each other's languages and I am enjoying her new 'tender' side that emerge here from time to time.

What a sweet girl Rosie is and how lucky you are to have her! I have missed seeing you farm folk because I was missing in action for the last year but now that I am back I will look forward to seeing your babies again! Over the next few weeks I hope to browse your older posts and see what you all have been up to! Enjoy the sun Rosie!!!...Tina xo