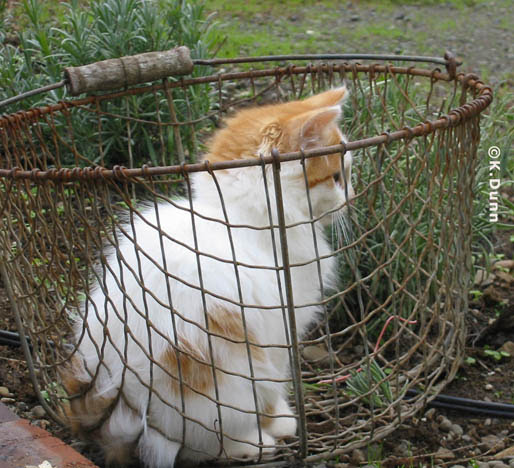 I can hardly look at this picture of Pumpkin Head from when he was a kitten. He used to love sitting in the egg basket.

Like his litter mate Blackberry, he just disappeared without a trace. He was one of five kittens born to Mama Kitty, and lived the first months of his life with his litter mates under a wood pile. It was during my 'trapping-neuter-spay' period, when I was capturing the litter that came with our farm, that turned into three litters because I couldn't catch the Mama fast enough. Mama now lives happily on the porch, her children all around the farm, but no longer does she slip off to bring food for her brood. She has grown plump and although she will not let me touch her or pick her up, she does follow me around the farm sometimes, but always at a distance - sitting up on a hay loft to see where I'll go next.

Pumpkin Head lived on the front porch, with Little Orange and Mr. Plum, and at one time Blackberry. His litter mates Fig and Teasel were sent to live on another farm. He was always at dinner and breakfast. When the kitchen lite went on in the morning, it was Pumpkin Head who sat on the outside window ledge, watching me inside. He knew breakfast was coming.

Two nites ago, he wasn't at dinner. I've been through this before. If a cat is gone two full feedings, it is not good. If they aren't there the next morning, it is bad. And by the second nite, it means one thing. Many nice readers wrote me when Blackberry disappeared last month, encouraging me he might come back. "My cat was missing 1 week and came back," they'd write.

But I know he won't come back. I gave him a front porch with blankets and food. He would have died a long time ago without that care. He never created any unwanted kittens, and he had companions You can't take semi ferels and put them in a house. I just hope he didn't suffer.
Posted by Katherine Dunn/Apifera Farm at 12:34 PM

My heart aches for you. I know how much you love the Apifera kitties.

You served him well, Katherine, and gave him a much sweeter life than he would have had on his own.

This is so sad. I'm sorry for your worry and heartache. It's quite amazing how attached we become to the little creatures in our lives.

I do hope that Pumpkin Head is still prowling around out there somewhere and that he'll eventually make it home.

Cathy is right, you gave PH the sweetest life he could have had. I'm so sorry...it's heartbreaking to lose our friends.

So sorry for the loss. Stay safe this weekend.The creeks are up high right now.

I am so sorry about your Pumpkinhead. I have only indoor kitties, I don't live on a farm, but I know well the heartache of a missing, or gone, kitty. I hope the small chance of his returniing to you is real, I will rejoice with you then. Until then, I will weep for you and him... and pray. With love, Kim

thank you for the work you do for animals, and for taking the risk to care about beings such as pumpkinhead. caring about them means inevitably facing pain when something like this happens. but ph (and you too, probably) were better off for your care. give some extra love to the other kitties this week in pumpkinhead's memory.

I'm so sorry for you, and like you I hope he doesn't suffer, wherever he is.

You are so amazing & awesome !

I lost a feral kitty last night also..out on our road, I was never able to pick him up but I loved him from afar, like you, supplying food, water, tarp covered dog houses for rainy days...
you have a beautiful heart..Bless you & your precious fur friends.

Thanks for the thoughts everyone. It just kills you when you don't know exactly what happened. But this is part of life. Little Orange is the last one of that litter!