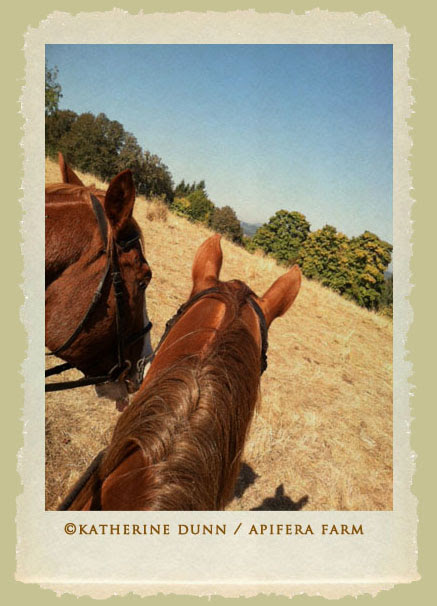 I have been soaking up each ride with my loyal mount. This summer has been the best horse year of my life. I made a conscious decision in late spring to make time for me and Boone, and it has paid off in so many ways, for both us.

Boone and I always got along and he's an easy keeper. He came well trained and had lived his early years as a ranch horse so was well versed, but he was also a bit deadened to cues. Never one to be spooky, his main fault was he was a bit lazy. Not willful, he did test me - what horse doesn't [what person doesn't]?. But for the most part I worked through it but I never had total confidence as a leader - especially on the open road. Boone also had some habits in the round pen that were always "I don't want to" moments, nothing I couldn't figure out, but I lacked certain skills - or consistent skills - to improve them.

And I didn't ride enough. I'd work myself out of it by thinking about the cars on the road [even though Boone never had a problem on the road] or other things that "could happen". A lot of this was due to my first horse I had at Apifera, a beautiful Palomino mare that was pure Alpha and had me wrapped around her and was in control of everything, including me. One of the best tips from my teacher - don't bring the problems of your old horse onto your current horse. And that was one thing I was doing.

So I invested in a small, cheap trailer, good enough to pull with my small truck, about 4 miles up the hill to a local barn where I now ride with the owner of the property - a young-eighty-year old woman who still rides and has become a wonderful friend and role model to me and Boone. We take a Dressage lesson with another woman there every 2 weeks. Yes, dressage. If you had told me a few years back me and my little Quarter Horse would be taking dressage lessons now, I never would have believed it.

What a difference all of the riding and time have made. The small issues I had with him are gone [but of course there are always new things to learn or retool]. He just needed a leader that was consistent. He needed to see me do it over and over, and I needed to see him do it over and over. He needed my praise at the right moment and I needed to sense he was happy on a ride. I have my confidence back, and so does he. It's a joy to load him up [he's wonderful in a trailer], walk him to the arena where he can run a bit with his gelding buddy, then saddling up and feeling confidant we have tasks to attend to - together.

I had no fear on a horse as a girl. But you grow up, you see people get hurt in different ways, or you have a scare on the road, or your horse carries a mental scar from sinking in a bog up to his saddle [ this happened to Boone long ago and he is challenged by soft, mushy areas] - all of these things add wrinkles to your confidence. It is a wonderful sense of achievement to work through it - with the right horse and teacher.

Thank you, Boone, long may we ride - together.
Posted by Katherine Dunn/Apifera Farm at 1:15 PM

That's a lovely story, Katherine. It's wonderful you're making time to spend with Boone AND having dressage lessons. As the owner of the most alpha of alpha mares, I completely understand having to 'step up to the mark' and provide the right kind of leadership. The rewards make it so worthwhile. Give Boone some wither scritches from me!