Miracles of the crocus 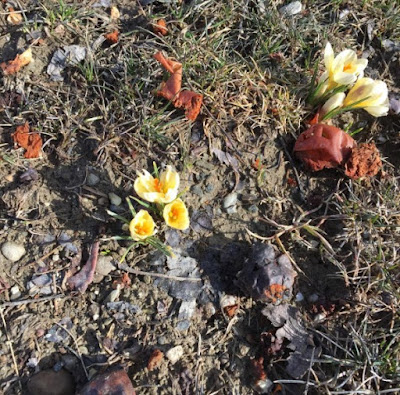 I tend to be an optimist which is probably what made living in a winter climate growing up be an okay fit for me. I had moments in the past couple weeks in our first year in Maine that reminded me what a long winter is. And I lost my optimism for awhile.

The thing about a spring that has sprung on your calendar but not outside is that it works in tandem with anything going on in your life that is causing strife–and who doesn't have that?

So, it seemed like I was thrown in a cave last weekend at some point. The real life strife events–I won't go into–but I do remember waking up to the new snow on April 2nd, and I felt almost claustrophobic. At one point, I wanted to sleep, but I just made myself go out in the barn and do early chores. Being in nature and with the animals is always helpful.

The snow was pretty. But it's April. And April snow is always a bit heartbreaking-even though that snow is now gone and most will be gone as the 50's are supposed to return to us next week–although they say more snow is possible tomorrow. Of course, this also worked me into a bit of a mini depression, as I saw Oregon people posting photos of quince bushes and other favorites blooming back West. I reminded myself,

I am here now. Welcome. Embrace.

Yea, but it's April.

The weather of the past two weeks, colder than normal, snow, more clouds, just compounded the daily challenges of life. Not to be secretive, but talking online about them is not a good idea and we are working at it and in time, it will evolve, things always evolve, just not always as quickly as we might like.

And then Martyn came in the house, knowing I had been fighting my mood and gloom, and said I needed to come outside with him. He took me to a patch of grass under Litte Apple, and there at our feet were the tiniest little crocuses I had ever seen. I gasped like a child seeing a first birthday cake. It made no difference what was happening back West in my old garden, what mattered is right there before me, Spring was speaking to me, in a much tinier voice that back West,

"Look at me! I'm tiny, but look at me!" that little crocus said.

Later that day, I painted a simple little ode to the crocuses, inspired by a memory of bringing our Lucia home when she was a baby donkey. She seemed to look at everything as new, fresh, a curiosity, a treasure trove at every angle–like any baby does.

The determination of a tiny crocus lifting herself up out of the cold ground, it is a wonder to behold.

Spring is a rebirth in any area of the world. But I was reminded that when one lives in a region such as New England with a real winter, spring is much more than flowers.

It is a miracle.

We are all needing crocuses today.
Please send a promise of Spring.