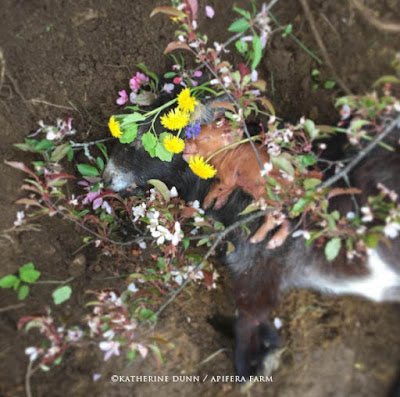 I don't know why death seems to come in waves-perhaps it helps us focus to the tasks on hand.

Yesterday afternoon we lost the tiny runt gilt who was born with a very weak hind end and quite thin. A litter of ten is big, so there was bound to be a runt or two. She latched on to the teat well, so I kept my eye on her and she seemed aggressive enough at the milk bar. Yesterday morning I decided to start her a bottle too because I felt she was getting more stumble in the hind end. I got some mil in her and she was strong fighting it, and was not near death at that point. Mid day she also did not seem in dire straights-she just needed time and milk. But at 4 pm when I checked on her, she was gone. In my previous check on her, she had been napping in the pig pile, and i wondered if she had been crushed, without the strength to move out.

I do know I tried, and she tried, and she had a short life of three days but was with her mates and mother in a warm, safe place. And I got to hold her a lot and care for her, so we all did what we had to do.

While we lost the tiny runt yesterday, today I approached the barn and had a thought just popped into my head as I opened the doors,

Death comes in waves...will there be another?

And there was old Rosie the goat, dead, Sir Tripod and Opie happily greeting me for breakfast.

She was never healthy - I took her on last fall from a breeder who said Rosie could not keep up at the hay stand and was getting thin, and wasn't aggressive enough to get enough feed. I had found this breeder and approached her via email, explaining how I took on old goats, and she said she let me take Rosie. When we picked her up I knew this goat was not long for the Earth, although I didn't say anything. The woman wanted $100, and I paid it and brought her home and did my best. I guess I'm a knucklehead for paying $100 for what was clearly a sick old goat, but she got one on one here and didn't get pushed around.

She was so thin and weak in the rear, often stumbling. I got a bit of weigh on her and got the lice under control, and wormed her. At on point she showed signs of congestion, but no fever, so I vetted her and brought her through that but every week she seemed to struggle with one condition or another. I felt sorry that she had given so much to this breeder and arrived here full of lice and thin as a bone.

I buried her and the runt together amongst spring floral to remind Old Rosie of youth and to show the runt the flowers she never got to see. They lie near The Head Troll and Scooby Keith, and the other piglets that died in the extreme cold farrowing in January. The gardens will be planted there though and it is a beautiful spot to be returned to earth.

Sometimes I question if what I'm doing helps or not.

{There are ways to support my animal efforts}
Posted by Katherine Dunn/Apifera Farm at 9:05 AM

What you're doing certainly helped Rosie. Her last day were filled with beauty, care and love. And you've done this for so many old, ill souls, Katherine. You help them, and you help those of us who watch from the sidelines. xoxo

I have to say each story of death takes my breath away, brings me to tears and has me marveling about the strength of the heart to crack open anew each.time.

And perhaps that is the gift in all of this? That we are affected, cry anew and marvel over the gift of life which is linked with death. I just buried a baby bunny this week ... every spring I find dead babies and I wonder if word is out this is a good place to die? I was upset because it had died under my yarrow and lavender plants - a place that has sheltered many rabbits and which feels so sacred to me. I had this notion it was now tainted by death. Until a few days later when I saw two grown rabbits lounging on the patio and suddenly, breaking out from the lavender, the first of 3 babies. Sacred in that it holds ALL of life.

That you gave Rosie those months of love and care to me is immeasurable. I know you've written this before: that after a life time of hardship the misfits come to you and perhaps for the first time receive love and individualized care. I think even a minute of your love makes it all worthwhile my friend.

"She got one on one here and didn't get pushed around." ❤️

In the end we all pray that we will be cared for by someone like you, a willing heart,and love to make last days best days. It takes courage to foster and hospice the elderly,and a lot of empathy and compassion. You are exactly right in what you do and thank you for doing it. Blessings of strength and love upon you threefold that which you give others. Robin

Thank you everyone for the kind words- Cathy, Lisa, as people who have known and met the many misfits here, appreciate you coming over to share these thoughts. Jason, I always respect your insights, and Robin thank you for the kindness. They are buried under the outer arms of M'Lady.

Dear little souls, they got the best care from you Katherine. They couldn't have found a better place than Apifera and a more compassionate person than you to take care of them.I send you my warmest thoughts .

I cannot add to all of these caring words and thoughts. Just know how grateful we are for all you are.