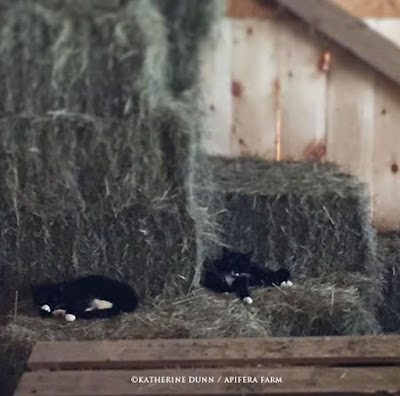 Last week I noticed that Stanley J. Catfish was not at morning feedings which is the norm. Since they came, the two cats have been a bonded unit, where one is, the other follows.

But I didn't think too much about it, and went on with my feedings. Still, it was not right. After all the ferels and barn cats we had taken on out West, I knew they often disappear, sometimes for many days, a few weeks even, and return unscathed. And sometimes they don't return.

I just knew it was odd that the two were a unit, unlike the cats out west, who were part of a huge clan and separate barns, so they had more interdependence from each other.

I waited a few days, and lost hope, and posted about it on Instagram. I think it was two days later, and there he was at breakfast. I was so happy to see him. He must have thought I was nuts because I sang to him, discussed his where abouts, gave him a lecture [oh yea, cat lectures really work, right?] and sat with him too, looking to see if there were any wounds on him.

The night of his return, he was extra hungry at dinner I thought, and I sat with him while he ate, pushing the bowl with my finger, and then touching his head. I'm trying to tender them both up in time for autumn rabies shots-it would make it much easier for everyone including them.

This morning at feedings, after being back one day, he was not there.

So Stanley J. Catfish must have a double life, a really good reason not to be around for a free and easy meal of stinky cat food, which he devours when he is present. I wondered if he might be onto a female somewhere, since he was only neutered about three months ago and it supposedly takes about 6 months for their wanderlust hormones to dissipate after neutering. Or maybe he is just napping, maybe he is ill and wants to be alone...maybe he has a pickup out in The Wood and he drives away to a cabin once a week. He might even have a passport.

Such is the mystery of the barn cat.

I was thinking though how quickly I had lost my hope when he left. I have been through this so many times, but instead of taking the 'think positive' route, I just accepted pretty quickly an eagle or fox got him, thinking he wasn't that worldly as other ferels I've known. I wondered if I'm losing my touch, my innate gut feeling-something we all have for sure-but I practice at listening to my intuition, and I wondered if I wasn't listening, or what had made me so doubtful this time.

I don't know. Maybe it's that death is everywhere there is life, and sometimes, especially on a small farm, it is best to acknowledge, and move on or one can go crazy worrying, wondering, imagining what happened. Was it a quick kill, was he stuck somewhere, had he been hit...on and on.

I'm not sure what the lesson is in what I just wrote. But I do know, as always,

Nature knows more than I do.

So does the darn cat.

I'm really glad he came back! He knows where to find love when he needs it.

Oh, the little stinker! I wonder if they know how much we worry about them?