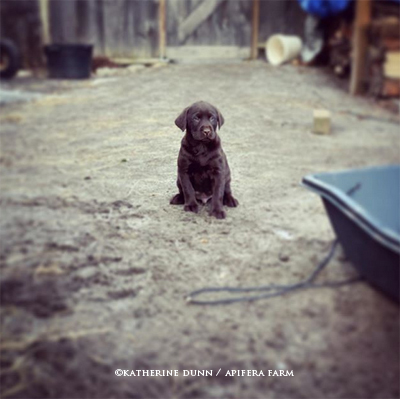 We picked up Bear today. All I can tell you is I instantly knew he is the right guy. He was glued to me the entire time there and all the way home. He's a very calm [as of today!] pup and seems to be a thinker, he positions himself out of the fray of the litter and watched from background. He likes to sit. Upon arrival, he was pretty scared, a little trebling, tail down a lot, but after a nap in the crate, and some food, he was much more relaxed and puppy like. Muddy has already showed him his tennis ball and it appears he 'gets it'. I am being careful with Muddy since he is ten and even though he's never shown aggression, he has been on his own for a few years since Huck died.

So far, the cats seem interested but not freaked out so that is good. Bear will be allowed on the couch with me [Muddy sits on the other side] and he eventually won't need the crate, but I have always crate trained and find it a good way to teach patience and boundaries. I had to reteach Martyn who understands Bear is my training student, not his. No teaching handshakes! As Bear sat and whined in his crate in the living room, Martyn asked how long we let that go on. I said, "Until he stops and then some" so he learns when he is quiet there is either a nap or a person to let him out for quiet behavior. I can't remember how long I needed the crate with Mud or the others, but I can tell he is figuring it out very fast.

And what a big day for him. I'd cry too! He left his mates [all the litter had been picked up except Bear and one other female] he left his home, he rode in a car for two hours [no accidents and slept in my lap the entire way]...think of waking up one day and everything is new-the sounds, smells, sights...

Mainly, I am just in love and hope to do him proud, and aim to work as a good leader. I was thinking that I've learned a lot about animals and training and behaviors [mine included] since living on the farm. I have trained many dogs, but I feel this will be an important partner in my work, and feel I am more equipped than ever to avoid some pitfalls. I'm excited. I think he is going to be an easy learner [but we shall see!]

I will be posting way too many pictures on Instagram. But who can get enough of him? I can't.

I cherish Bear...already.
Posted by Katherine Dunn/Apifera Farm at 1:28 PM

Oh how wonderful for you! I hope he sleeps well tonight. I know you and Bear will make lots of people smile and remember the sweetness of life.