What a week, but it ends with love 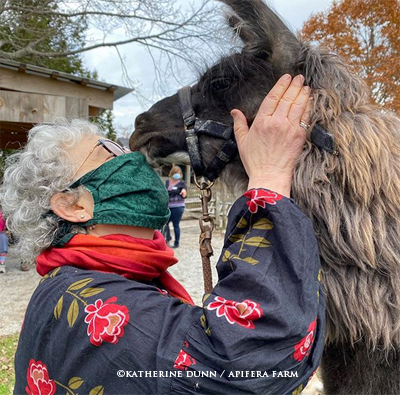 On Wednesday morning at chores, I found old Friede the goat, dead. She had died in her normal position of sleep, her head slightly bent-she had not cast. She died in her sleep. I had told her if she chose to go, it was ok, but that I would help her next week when the vet comes to do equine teeth checks. Friede's crippled ondition-she was born that way-was getting worse since mid summer. In the last week, she could rarely get up on her own, and when I helped, anything could make her easily lose her balance. I had to watch her closely to make sure she wasn't stuck out in the rain. No way to go into a Maine winter, unfair to her. In the final couple days, I left her inside since it was raining and cold. She had one final day of sitting outside, eating fall grass. And she died that night. I admit that morning, I had had little sleep and was on high anxiety due to the election as most of America-no matter what team you were rooting for-so when I saw yet another elder dead, after so many one after another, I had words up to the sky. I have also been caring for Mister Mosely who is in his pre-journey but I have to check him, clean him and just make sure he is at peace, which he is. After I found Friede and came in from chores, I took Mister Mosely and put him by my side on the bed, to take a nap. But first I cried and cried, and told him all the things that were upsetting. I talked to him too about ...everything. I needed that outpouring. I have not had time to just let it out and weep....about the many goodbyes, and the state of the outside world.

The days this week have been tense of course, for many...anxious. Like many, I just want it to be over–of course I want one result over another, but I am done with the analysis. Time to regroup, refocus, peel off some armour and get on with it.

That is why the elder visit here at the farm today, with our friends from Lincoln Home, was so wonderful Firstly, the 60+ degrees and sun was perfect. This group have met Harry, and Opie, and some have been here last year. But this was the first visit we could do this year due to the pandemic [they are under different guidelines that our Maine Care friends at Cove's Edge].

We got everyone into the orchard, and then I went and ran in with the goats-they come in like Chariots of Fire, it is always funny for everyone to see their little squat wide bodies churning in. Then I got Arlo and brought him in. I wanted to see how he'd do, and Harry was in the adjoining paddock. Arlo really did just fine, considering he has not been out for over a year. So this was a big crowd of 12 or so, and lots of movement and laughter. He is still too pushy into me, but it is not threatening, more wondering what the activity is. And he still needs boundary work. But he was fine, and he is definately more approachable than Harry in some ways-he tends to lean in for head kisses. Harry is more reserved, more of a dignified gent.

I put the equines, all of them, in the adjoing paddock, and after Arlo had about 20 minutes under his belt, I let him in with the equines. He romped and ran with them. The elders loved it, it really brought them joy. They kept telling me how wonderful it was to be out and about and with the animals.

One of the residents brought me one of her little bracelets, and it is symbolic to me-bright, shining, glittery-something I didn't feel on Monday. But it felt more symbolic today. I will send her all my books as she is an artist and a very interesting on top of it woman. I also adore her clothing style. I told her I had a style once, free and arty, but now I'm mainly in my farm attire. So I love seeing her outfits, and color, and sprite.

They are a charming group. The new activity director is great to work with and open to all kinds of fun things, so we will have much to do in the coming months.

I know some of you might be disappointed in the election. I was proud to vote blue, and proud to support a new administration. And I am relieved. But some of you aren't. But I am going to kick back and celebrate tonight, I think I've earned that. And then I am going to go on with my work in the community, and if I see  behavior or words spoken that I feel are wrong, or hurtful or bigoted or sexist, I will combat and educate through my actions, and outright words if needed and appropriate and safe. It is what I did when Trump won. So I will do the same with Biden. There is much work to do, there always will be where there are people. A post shared by Katherine Dunn / Apifera Farm (@katherinedunnapiferafarm) on Nov 6, 2020 at 10:10am PST