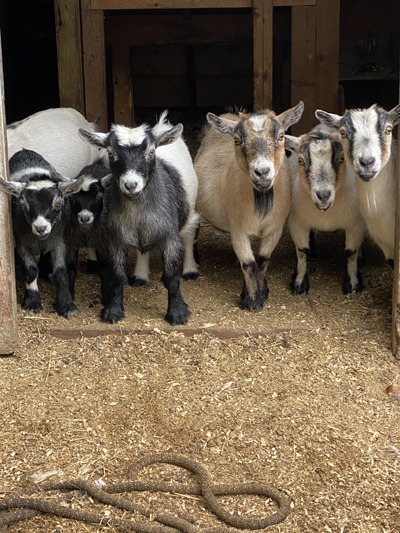 {My latest piece for Tails & Tales for LCNME}

Teddy, a Great Pryenees, was recently adopted by Apifera from a rescue in Virginia. He was well suited to make visits into the elder homes, and he is a natural with the elders. His arrival to the farm also helped Mrs. Dunn, who was mourning the recent death of White Dog, the farm’s beloved Maremma.

“What do you do when you’re there, Teddy?” asked little Hannah the goat. Teddy and I had just returned from visiting our elder friends at Cove’s Edge.

“I stand, and they talk to me, and they hold me,” said Teddy.

“Did you know White Dog?” asked Pickles the goat.

“Yes, but we never met. He was working in his current realm to help me find Mrs. Dunn,” said Teddy.

“It’s true, Teddy has helped my heart, he is a gift from White Dog,” I said.

“Mrs. Dunn, what’s it like at the old people’s home? Do they have a barn there?” asked Pickles.

“No, I’m afraid not, they have lots of windows and bird feeders outside the windows, and stuffed toy cats,” I said.

Earnest the pig sauntered over to the conversation, “It’s sad they can’t have animals, but there isn’t enough staff to care for the people, let alone the animals.”

The animals all sat somberly, except for some cud chewing by the goats.

“Imagine, a home without animals?” said little Hannah the goat.

Suddenly, Pickles leapt up and said, “I have the most scathingly brilliant idea!”

“You were watching old Haley Mills movies again, weren’t you?” I asked.

“Yes! So we can be the animal staff! We’re animals, so of course we know how to take care of animals!” said Pickles.

“I don’t think you’ve thought this through, Pickles,” I said. “First off, you’d have to have a place to put the animals there.”

“Mr. Dunn can help us build a barn,” said Puddles.

“He has too many jobs already,” I said.

“We’ll get him more pizza from Oysterhead,” said Ollie the goat.

“Let’s just say Mr. Dunn could help, you’d still have to drive there to care for the animals,” I said.

“So what?” asked Pickles.

“Oh, I have that figured out. Harry the llama will use his legs on the pedals and I’ll sit on Harry’s lap and use my front legs on the wheel. Earnest says that’ll work,” said Pickles.

“It’s true, Mrs. Dunn, I saw it in an old Western movie,” said Earnest the pig.

Lord help us, and me, I thought.

I continued with chores, in ear shot of the little masterminds in the barn.

“I think we should get three chickens so they can have eggs, and one goat, and a cat,” said Pickles.

“And some frogs!” said Ollie.

I chimed in, “How about a pony to pull them in their wheelchairs?”

I so wish it could all come true, I thought.

Posted by Katherine Dunn/Apifera Farm at 8:33 AM