Wisdom of the Old Donkey {latest from from Tails & Tales} 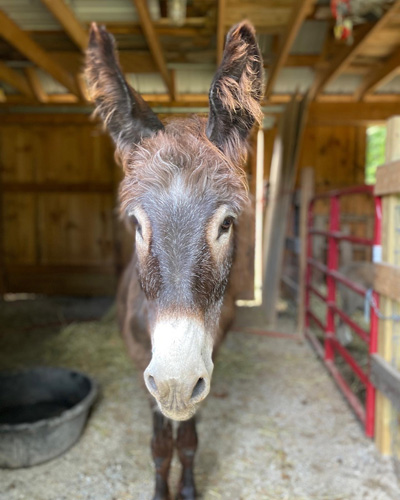 “No!!!” I heard a little voice screaming.

What on Earth, I thought.

As I entered the barn, Earnest the pig had his arm around little Hannah the goat, who was crying. This is a very common scene, as Hannah is very sensitive and not very savvy at her young age. She is easily fooled by the pranksters of the group-you know, Pickles and Puddles.

“They ate my pumpkin, Mrs. Dunn! They killed her and ate her!” Hannah cried into my overhauls.

I could see shadowy figures in the not so distant corner of the barn, pretending not to be there.

“Pickles! Puddles! Hop to it, over here, right now!” I said.

“I know nothing!” said Pickles.

“You do too!” said Puddles.

“But Mrs. Dunn, the pumpkin was already mushy and dead because the squash bugs got it first,” pleaded Pickles.

Hannah screamed some more into my overhauls.

“It’s true, Mrs. Dunn. I saw the little pumpkin yesterday. The bugs were on her and eating her up," said Earnest the pig.

“Hannah, this is all part of Nature’s way. Nature gives us bounties, and other parts of Nature take it away,” I said.

Ollie the goat, always cheerful no matter what the occasion, came running up to little Hannah. “It’s just like when you eat your hay, Hannah. Nature turns it into something else in your stomach and then you poop and the worms eats it!”

“You mean the bugs are going to poop my pumpkin out?” Hannah cried.

“Well, I guess in a way they are,” said Earnest the pig.

Hannah went running off to her favorite tree, crying, “I will never eat or drink again in honor of my pumpkin.”

“Let her be,” I said. And we all went about our morning.

Around mid day, Earnest and I wandered out to see Hannah, who was still under her tree.

“Hannah, that is a nice little pumpkin you’re holding,” said Earnest the pig.

“Death is like a moon that doesn’t see the sun come up, that’s all,” said a slow talking voice. It was Peso, the new arrival. He was a very, very old donkey, the oldest donkey that had ever lived on the farm.

Peso came closer to Hannah. “Hannah, your little pumpkin got to live her life in her field, unencumbered by the man made world. Nobody carved her up and stuck candles in her, or slung her from a cannon, she just got to be a simple, beautiful, humble fruit breathing in the sun on her Earth,” Peso said. Hannah stopped crying.

Just then, Poetry the eldest of the old goats called out, “The Queen is dead!” and everyone rushed to the rabbit ear television I’d finally put in the barn for them.

“She was my favorite Queen!” cried Hannah.

Hannah shook her head, yes, pressing into my overhauls again. “She would have liked my pumpkin, I’m sure of it.”
Posted by Katherine Dunn/Apifera Farm at 5:39 AM

Thank you for bringing a smile to my face this morning!