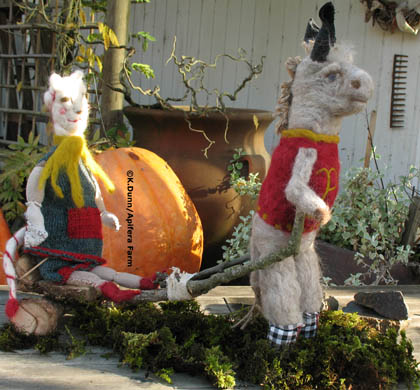 One of the things I did while my mother was visiting during the holiday was sit with her while she needle pointed, and I needle felted creatures for my ongoing collection.

I started with Grandmére Chat, knit her a sweater dress, which led to all sorts of things. It was a pleasure working on one thing for 4 days, and since my elderly mother could not handle the temperature of my studio, I had to work on things I could carry into the house.

Martyn made me a little wagon for Grandmére and then I needed something to pull her. Well, of course, it had to be a donkey, specifically a donkey with the first initial "P"...I love how these creatures emerge, and one thing leads to another. 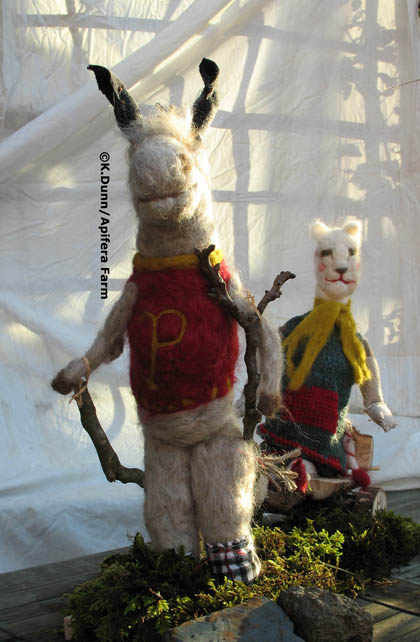 The hours I put into these beings and their clothes and details make them difficult to price. I decided to create Le Collection de Creatures for my ongoing birthings of these detailed felt pieces. I have no intention of working hours on these and selling them for $75 on Etsy. They are priced accordingly. What I feel emerging are stories, some that will help me along with my novel, some that will end up in picture books. [And I'll still be doing my other sock creatures in the $125 and under range].

My immediate goal is to create a backdrop series for these creatures, from my illustrations - say a forest scene, or a city scene, and the creatures would be placed in a shadow box /set like a theatrical puppet stage.

There will someday be a whole family of them, a whole novel's worth, probably all tucked away in boxes for now. It's one of those ongoing projects, that years from now, perhaps long after I'm gone, will be seen as the beginning of something.
Posted by Katherine Dunn/Apifera Farm at 12:40 PM

Just a curious question, do you actually speak french?

What a fabulous collection...they are quite theatrical... definitely weaving a story all their own, it is wonderful to see your imaginings coming to life in the third dimension.

Thanks Amy - Just wait until that sewing machine cord comes [I've been waiting 3 weeks for the darn cord!].

Ah, Rafael, I sense some cynicism in your question. Mais oui, je parle francais, mais tres lentement. Et, peut etre, tres mal...And yes, I know it should be 'des' creatures, but I like 'de'.

I don't speak French but I wish I did. But I can say in English that your new animals are so incredible!! I love them! What an imagination!!
Debbie

Fantastic! I just learned to do needle felting in its most basic form, but now I'm inspired to learn more... Did you teach yourself?

Hi Debbie- thanks for the kudos. Everyone should click on 'Sunflower" of Debbie's comment and go to her site to see her wondrful little fairy sensations she and her husband make.

Anna- I'm self taught, one firend got me started, I still have a lot to learn. Need to get more experience with doll parts so creatures will stand better.