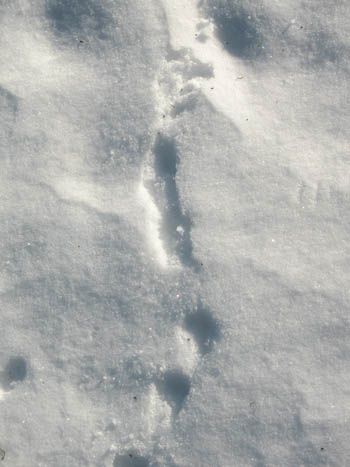 I read that somewhere recently, in a poem. The snow tells us so much about all the natural activities that took place while we are tucked in the house at night. A bird party near some dropped corn feed, a three some of deer wandering through to higher ground, a lone cat heading for the barn through the vegetable garden. Under the car, I see where Mama, Plum and Orange sat huddled, mingling so their feet all became one. The large, clumsy imprints of my muck boots seemed to ruin the beauty of the other natural foot dances. I pondered how much lovlier it would be if I were barefoot,or in natural skinned shoes.

We're getting through the winter storm with a few bumps, but feel blessed to have power, heat and water. Our main house pump broke a part in the cold, but Martyn spent all day and fixed it. Get 'em handy, ladies. The main stress of the cold weather is on the animals. I fretted a lot but so far everyone is ok. The first storm day was very blustery and Boone was shivering by 4pm feeding time. He has access to his indoor 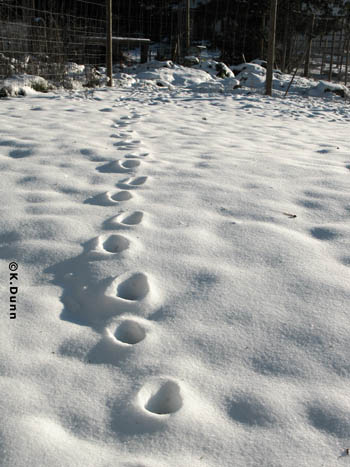 stall all day, but the wind kept it miserable. I fed 4x the normal hay, and put him in an inner stall that night and he was fine. I even put the hardy donkeys in, with Frankie, and it helped Lucia too,who arrived at dinner with the shakes. I worried most about the chickens, but so far they are ok. The barn cats seem uneffected, but the porch cats have taken to their underground den. I rigged up some hay areas for them and it helped. HAuling water 2x a day to 2 barns is a drag, but at the same time, it makes me feel very crispy and alive, and useful and loving. Martyn has stayed home too and it's nice to have him in the barns, even though the animals always address him with, "Is everything OK? Why are you here today? Are you sick? Is it shot day?"

Being from Minnesota, I usually scoff at the weather tv people here. 25 degrees usually garners a giant news title like "STORM WATCH!!!" But 15 degrees makes for havoc in the barnyward, and it reminds me of the long, long winters in my former life and land. It's nice to have a week of snow - but like the crew I feed, we'll be happy to feel the balmy 40-50 degree winter rains drops.

But snow on the tippy tops of everything, it's lovely while it lasts.
Posted by Katherine Dunn/Apifera Farm at 10:01 AM

It's nice that you get to experience a little bit of the homeland winter. More work, yes, but also probably a bit more appreciative of your new weather patterns. I too like to see who visits in the snow overnight.

-17 below here in West Central Wisconsin last night. The hot water line to the washing machine decided to be cold blooded and hasn't budged yet. But, it will warm up 40 degrees to 20 and will let me wash whites again.

Ah, 17 below, I remember it well...I rmember one of the last years I was there it was -40 for about 4 days, warmed up to -20, and when it hit about 0, wow, it felt good. The one thing too about the cold like that, you go to sit in your car first thing, and it feel like a rock, no cushion, no squish. I was reminded of that when everything was so solid feeling even at 15....but when it gets below 0 it's all cold.

We ventured out today to get supplies [wine, water, cat food!} and the road s were bad still.

I agree with the comment about going out in the snow barefoot (I actually did it to see the print). I love to see prints in the snow. We don't too much of it here in my area. Just light dusting even though the mountains surrounding us gets it good. Right now we are having unseasonably warm balmy weather in the 50s and 60s with rain. I was so hoping for a white christmas.

ps-I checked out your foliolink page. I love your work!

Hi Kelly, thanks for stopping by - I'm impressed you did a snow print.We're getting more snow - lite flakes, beautiful - last night we were stressing for a minute about money [my landscaper husband losed money each day in this weather] but then we realized it's like a forced vacation, I can sew and bake, we ventured out 3 miles and bought good Oregon wine, made a fire, a good meal - man, people pay for this! Cheers.

No matter what particular kind of extreme, when weather turns harsh I am always so thankful for having safe, warm shelter, food and a wonderful Hubby!