Birthday of a Dirt Farmer, and one little goose, er, goat 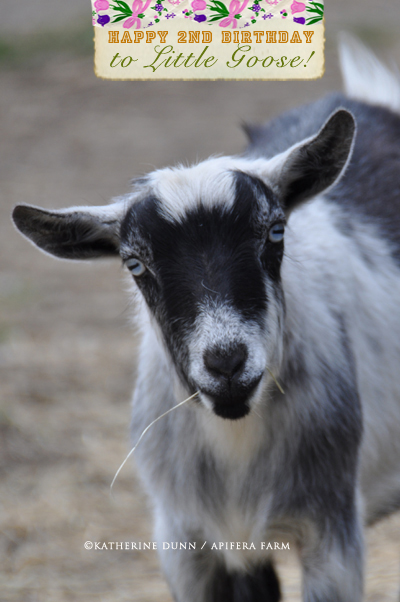 You might not know the story of Little Goose's arrival here. Back in 2013, my mother died. It was sudden, even though she was 87. It was a huge loss leaving gaping holes in my daily life. At the same time, we had the usual losses on the farm that come with having elders. I also had to say good-bye to my old One Eyed Pug two weeks after my mom died.

I announced to Martyn that I wanted to get a little goat that was young and vibrant, for my own selfish needs, a goat that wouldn't die right way, what a concept. I felt I needed it and deserved it. He agreed. Without knowing it, sometime soon after that, Martyn found out one of his clients had a little wether goat that she was happy to send to Apifera. And it just so happened, said goat and Martyn shared a birthday. Behind his back, I had found a little pygmy too, the adorable, tiny and still tiny, Little Moose-and he was born on on my birthday which is March 10. Martyn and I always have had this ongoing 2 week celebration between 2/26 and 3/10, for it is the only two weeks of the year that we are the same age, then I get older than him.

I can't keep secrets from Martyn, just can't. I was dying to tell him, and spilled the beans one night that I had found this goat and the woman and I had already made plans for delivery. He thought that was fine, except he too had found a little goat and we just thought,

The universe just showed us two goats, with our same birthdays, there is no use asking any questions, it is a gift and it is meant to be.

And so Moose and Goose came to live with us and brought great delight to me and the barnyard that year of such great loss.

The Dirt Farmer is aging like George Clooney. I am the lucky one. I find his face stubble and raggedy locks like looking at a swan or any other creature of beauty. I can be out in a field and see him at a distance with a hammer in his hand and I see the same man I met years ago-hard working with absolutely no ego. I am so grateful for his birth, as it allowed him to grow up into the person he is and somehow we were able to be brought together in our mid years. I know I often say I am the lucky one, but I know Martyn is blessed to have...well, moi! We are a good match. We are best friends.

I will do the birthday boy cooking. Since Martyn is the true chef in the house, I will bake one of my standard chicken breast recipes my mother taught me years ago that I always manage to do perfectly. I bought a special bottle of wine, some asparagus and mushrooms. I might make a lemon pie. We will celebrate with friends and family Saturday and he will cook some Apifera lamb. Our two week celebration of birth and life has begun!!

As for Goose? I held him tightly this morning, which he still tolerates, and told him why it was such a special day. He listened, then grabbed some of my braid and took a chomp, as he is prone to do. I took it as a compliment and he scurried off to the barn. 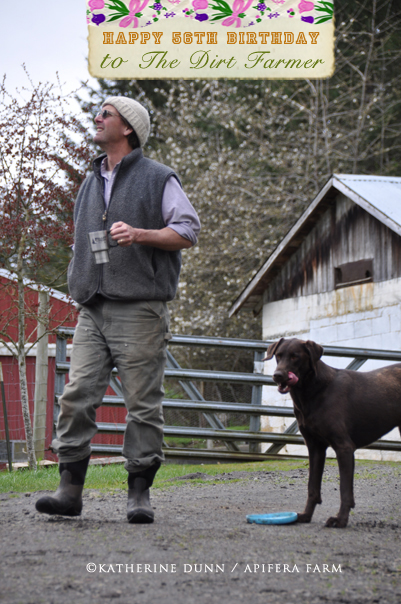 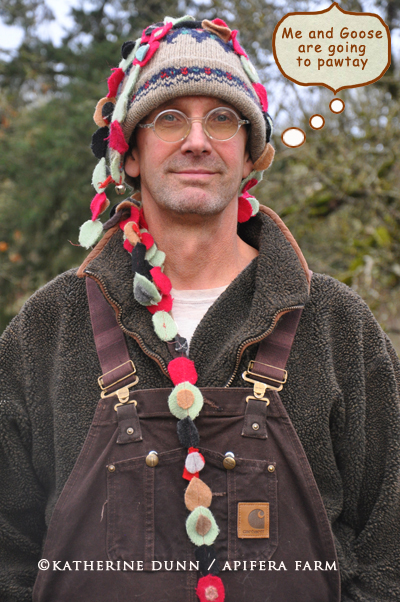 What a sweet sweet story of love and lemon pie. Enjoy your celebrations.

Sounds like a perfect birthday celebration(s) with sweet goats and all the barnyard in attendance. Best friends are best and ageing like George Clooney has to be good. xox