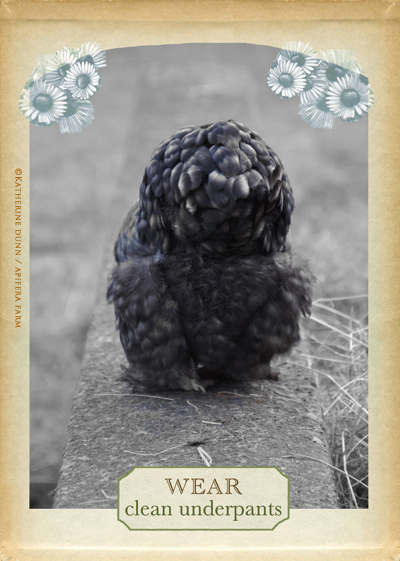 I found Henny Penny today, her little body was lying in Old Barn in the hay area where Rosie has been residing this winter. A couple days ago I noted in y mind I hadn't seen her for a couple days, but she was one of our most active setters and we'd often find her sitting on a hidden clutch somewhere.

Henny Penny was well over 12. She had a perfect life for a chicken if you asked me. She free ranged, lived a long life free of being hurt by predators, had roosters that protected her and didn't bully her and she had an old barn that was her partner in crime-stuffing eggs there to roost on, always looking for a way to have more chicks. Let's not forget it was Henny Penny who became the surrogate mother to the one surprise chick that hatched from another hen's egg-that chicken was named Una but later became Uno, when it was apparent Una was an Uno. Uno the rooster was part of Henny Penny's tribe in Old Barn, and he was there this morning when I made the discovery.

It's always shocking to find a body. When I first saw her, I did let out a soft gasp,

With the pig snorting down food in the background, and the donkeys relishing morning hay, life was already going on as usual all around me. Animals and the farm are the perfect teacher of one of life's most important realities-nothing stops for anyone. I first examined her body and was given a wonderful gift–she had clearly died of natural causes. There were no wounds and no signs of stress. She was old. She died amongst her flock and in a warm barn. Selfishly, she died where I could find her and know how she died. This is often not the case with chickens and cats. We wonder if they suffered or were half dead out in the bramble, waiting for death. So to know that this little hen died a good death, was a gift for me.

And she was the smallest member of the farm. She was a Bantie hen and the funniest little character. She had little tufts on her feet and the prettiest markings. A fierce setter as I said, she also was very independent. It would drive me mad that she'd find roosts high up in the barn and not come into the hutch at night. But now that we have the dogs, the raccoons don't go into the barns and I'm a bit more relaxed about it.

You can get attached to chickens and Henny was special-her little waddle, due to her small size, brought a smile every time. I've held other chickens and wept. Often I'm weeping for the past month or year's losses, that were stuffed inside a zip lock bag somewhere, waiting for a good moment to express some pain and move on. I didn't weep with Henny. She had such a long, good chicken life. But I did sit with her for the longest time this morning, holding her tiny body. I told all the hens and Papa Roo she was gone-but they already knew and were busy scratching and pecking for breakfast. I'll bury her in the pumpkin patch today.

I'm so glad I included her in the new line of postcards. And for the record, I found her with clean underpants.

Not many chickens get to die of old age, and even fewer get to spend their lives at Apifera! RIP, Henny.

Thanks, friend. She did have a wonderful life! How many chickens can say that.

Aww sorry about Henny. Our ducks are pushing nine and they are all hatchlings together. I fear they may all leave us some day en masses. Sweet dreams wherever you are Henny. xox

Henny will be sending you pennies from heaven... she lived a very good life! So glad you were able to witness her peaceful exit....

a grand story for a good ol' gal.