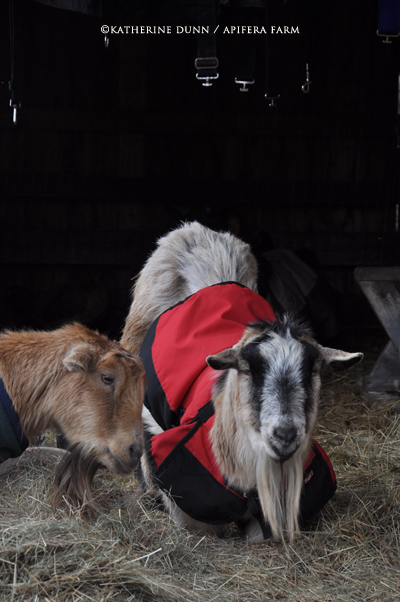 When he arrived from New Moon Farm, what, a month ago, he was stronger although not very well off due to the neglect. He never ate well here, but did okay with hay-and he was and is very thin-which can take 6 months or more to get on one of these old guys.

But he always called out in the morning and anytime I came to the barnyard. He has not really bonded with anyone yet though, even when Mrs. Aster [one of his old herd mates from the same neglect case] arrived. Once Mrs.Aster was failing, he seemed to distance himself from me a bit. He always seemed to have a 'shark eye' , somewhat distant. It is easy to put human emotions and spin on an animal. I do it in story and art, but in my caretaking and hospice work here, I try to step out of the human head, and be an animal. My sense with Ezra is...he is tired both physically and emotionally. He has been through so much upheaval in the past few months-losing the home he had, losing the humans he had that had dementia and couldn't care for him, watching two herd mates die there without care, then seeing another herd mate die shortly after at New Moon. He arrived here, and we brought home Mrs. Aster one of the last of the herd that was living [still one left up at New Moon] and he watched her fail. He knew. He knows now, I just know it. He's not afraid of "it". He is afraid when he falls and can't get up, which happened yesterday twice.

I've got him on probiotic this week and some vitamin regimes I do, learned from my vet. It's the same routine Aunt Bea got, or all the others. But in the last two days he's had horrible diarrhea. His hay eating has declined. Sometimes the damage even on a young animal from starvation can't be overcome, add to it his old age and his body might be ready to switch off. I clean him up and sit with him a while, try to sense him. I sang him a song last night, told him the herd was up there when he was ready. I suppose you can call me dramatic, but I just don't think he has it in him. But he until he is either in complete distress, or he takes his last breath on his own, I'll keep up the regime. He has his little duck hut that he feels safe in, and usually in the morning Sir Tripod Goat is there. I asked him last night if he could make it to spring, and warm sun, it might help. But he just seems to be losing his touch with the here and now. It is as it will be.

Give him a kiss for me and I will send him some reiki. You can read him this poem. I thought of it for him. By WS Merwin

If we are separated, I
will try to wait for you
on your side of things

while a side is there

Thank you for this poem, I love it and just put it on my wall! It will be a good one to have in my hospice bag too. xo