Apifera hunkered down in the nor'easter... a place of deepness 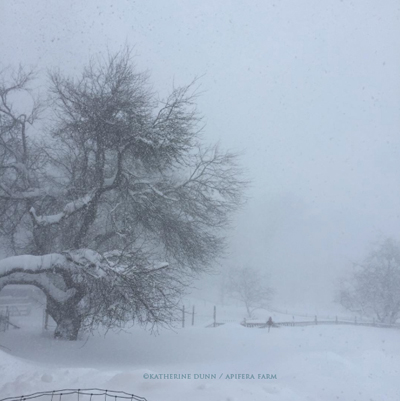 The storm they predicted to be "epic" did not disappoint. I guess I was glad it was all it was cracked up to be. It gives us a chance to see the improvements we need to make for next year. And it also is a cold, hard reality check that we have left Oregon.

I am no wimp. I ate weather whining, as you might know, at least in public. I have to say though, I was very restless last night and I kept waking up and wondering why I was restless. The worst of the storm hit in the late night/early morning when the winds picked up too. One thing that is different here in a storm compared to Oregon, is the windows get really snowy and crystal speck, so you feel a bit covered in an avalanche. That has cozy moments, and moments where I think I am feeling a bit claustrophobic, which took me by surprise.

This morning Martyn shoveled a path to the front barn for me, and as I did feedings he shoveled another path to the new barn, about 200 feet I guess. It's light and fluffy so not that hard, but the snow was deep enough to go down into my Mucks and create snow packs in my socks. Icy! When I got out to the new barn, there was White Dog, in full winter spirit, ready for his breakfast. Rosie's slider and blown open an inch and the high winds had blown in some snow–she was buried in her usual hay bed, but had snow on top of that. But she was snoring and warm to the touch so all is well.

I did my chores and just wanted to hold all the animals. They are so stoic with weather, and in some ways, I think the cold and snow [it was 25 so not that cold, but very windy] is almost easier on them than constant rain and mud. Once you're wet, it's hard to get dry out West.

It was, and is as I type, white out conditions. I had momentary thoughts about Oregon, and know that the buds are on trees and the grass is green and on and on. I wondered why we were here. What is so important, I thought, that we felt propelled to come here. I went through the long list of the facts of why we chose to move, and that was all fine and good. But I wondered, there must be something that will happen in time that will make a nor'easter just like another rain storm.

I refuse to be a winter wuss. I will go hiking in The Wood tomorrow if the wind dies down, look for tracks. I had moments feeling like I'll never see the grass again. I felt kind of agitated.

And then I realized that the storm is bringing up something in me, memories, or deep down things to be examined in an intimate setting. Someone I really admire that I've sought guidance from over the years, recently said that our time in Maine is for a reason and part of it is to allow me to "go deeper".

I think winter is like that here. It is a place of deepness, it is not a carefree place like a walk in a spring field can be. It can bring out darkness, or help you reach for ways to address darkness that may keep you in touch with light. 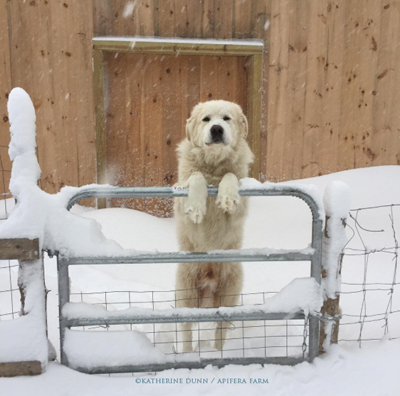 Posted by Katherine Dunn/Apifera Farm at 9:59 AM