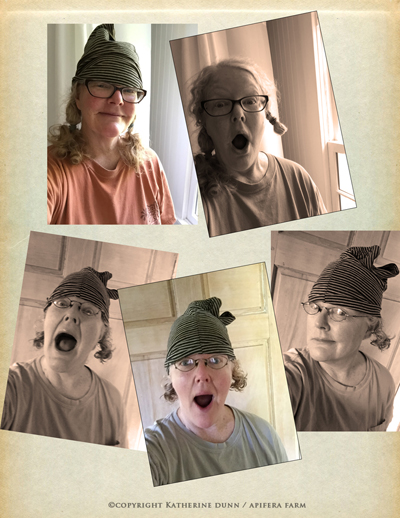 I heard that a long time ago, when I was maybe a teenager-I can't remember where or when or who said it, but the gist was that too many girls and women get attached to outward appearances - such as long hair. It made an impression on me. The hair becomes an entity of its own. I remember some young actress, I forget her name but can see her, a pretty redhead with hair a lot like mine-curls, thick and long. One day, she cut it off in a pixie. Her producer went nuts, and many fans of the show became downright incensed she had the nerve to cut her beautiful hair off. But she said it had become too much of a drain, it had overcome her as a person. She felt like her 'hair' was front and center and everything behind it was invisible to others.

When I was little, my mom made me keep my hair cropped. Eventually at about sixth grade, she allowed me to grow my hair. I mean, she wasn't a tyrant about it, she told me that if I kept my hair short it would grow thicker, and since she had thin hair I suppose she believed this. I really didn't care, I thought my hair was horrid no matter short or long-I was teased on the bus and called "curly fungus, "rusty" and "carrot head".

In my twenties, it was the first time I remember realizing my hair was kind of nice. And I kept it long, then chopped it off and grew it back each time.

When I moved the farm, it was easier to just always have it in my braid clumps. I never wore real braids, just banded clumps. My hair has gone from a true ginger red, to strawberry blond-mouse brown on the top and reddish blond on the bottom. I'm tired of dabbing color on the top , it's beginning to look...like it's trying to hard at something.

Hair becomes such an anchor for women, much more than men I think. There was a time when women were shamed for cutting it off. Imagine that.

Anyway, I chopped my hair clumps off today. It's the beginning of something I think. It is different than cutting it in my younger years. I've been giving myself haircuts for years now since it's too expensive for me to get it cut, and since I wear it in clumps what difference does it make. Every now and then I went in to have it leveled up, or have some color added to it but ti always felt like a decadence and waste of money once i moved to the farm.

I just suddenly -in the past couple months- I felt tired by it all, weighted down, like it was out of step with my head and heart. I think this entire journey of the late 50's has started to settle, and I'm coming more into the understanding of what the reality is in front of me–I look older, or I look like I'm going on 60 not fifty, my neck and face have lost that perk and wrinkles are there, and puffy skin comes and goes with the weather. But for some reason my long braid clumps needed to get chopped off today. I'm taking the 5" braid clumps and I'm going to make a wig for the puppet-he'll like that.

I took this first chop and  realized it was quite daring of me, but I didn't even hesitate. I'd never chopped this much off without a real hair stylist. But I just thought,

What can go wrong? It's just hair.

I had an image all week of my long hair clumps becoming little shorties. And now I have that.
Posted by Katherine Dunn/Apifera Farm at 12:07 PM

Email ThisBlogThis!Share to TwitterShare to FacebookShare to Pinterest
Labels: Wisdom, Wisdom of Elders