A miracle at Apifera! Rosie the pig explores the countryside!

No matter your religious beliefs, it is nice to experience a miracle or two in one's lifetime.

And a miracle has occurred here at Apifera.

I went out to do morning feedings and did a double take in the sheep field. Rosie was grazing with them. Now this might not seem like such a big deal to many of you, but it is, it really is.

You see, her royal highness has not left her private suite and paddock for over a year, and back in Oregon she had not left her Old Barn suite to even go out and get some sunbaths. If you've been following along, you know that The World's Grumpiest But I'm Fine As I Am Pig has very particular needs-sunscreen for her tender skin, just the right bedding so as to help her dream state, and privacy. But in the last months we are seeing her blossom in her older age, to flirting through the fence with Earnest, and to venturing outside more and more in her private paddock.

In the last few days, I've left the gate into Her Most Tender One's paddock open, because there is so much long grass and I wanted the sheep to eat it down-her pigness just doesn't graze fast any more and sleeps most of the time. I left the gate open in the past days since Rosie just doesn't venture out and that way the sheep could come and go.

But there she was, enjoying her grass this morning far from her comfort zone.

We think Rosie is pretty much blind. I think she still has her hearing, and her hind end is arthritic or appears to be so she doesn't move very fast. She's always had an odd walk for a pig. It was so nice to see her out and I decided to let her be, but checked on her mid day to see if she was okay, since she can't see. I found her in the sheep barn with the flock, looking like she really wanted to find her sleeping spot. So I went and guided her to her suite.

There was a time when I thought Rosie had come to a point where life wasn't good for her anymore. I feared the trip to Maine and the winters here might do her in-but no way would I rehome her because I don't think there are many people who delight in grumpy pig needs. And once I commit, I commit. She had lost some weight and her skin was having issues. She was so grumpy for those last couple years in Oregon, no vet could really work on her. I had one though that knew pigs well and always came to my aide and we always got a chuckle out of it all. We had to get a microchip in her for the trip and that was a challenge but we did it. She had a great trip out in her private sleeping chamber, and I think the summers here are better on her since it isn't as dry. Her skin is looking good and her weight is a better. Next spring she will be ten. That is getting up there for a pig.

So Rosie had a good day. I hope she has many more. She is some pig. 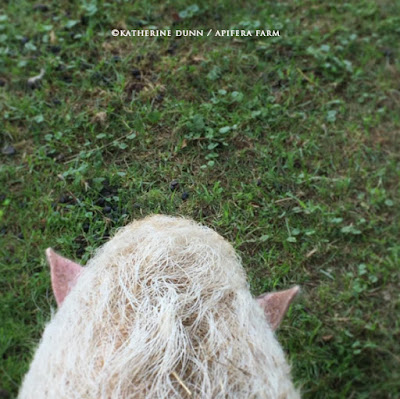 A post shared by Katherine Dunn / Apifera Farm (@katherinedunnapiferafarm) on Jul 15, 2017 at 8:07am PDT