Conversation of the pumpkins 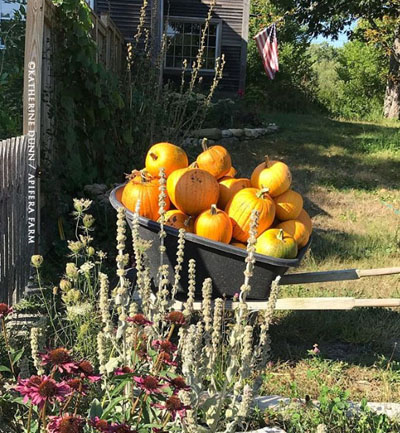 "What a beautiful day," said one of them.

"Can you move a little, I'm feeling claustrophobic," said another deep in the pile.

"Why did she put you on top, you are the biggest?" complained another.

They all sat heaped in the wheeled tub, waiting, their destiny to be decided by me, the steward of the place and that includes vegetables. Of course, Nature herself partook, and continues too. Some of their cousins rotted in the hot sun this year, but not too many. Those orbs fed bugs and grubs.

Some of these chaps will feed the pigs. Some will sit on our stoop for us to enjoy until they soften and then will be gifted to the chickens and goats.

I have always felt affection for pumpkins. How can one not. Yes, cynics will say I am humanizing them, Disney-izying their characters. But I really do sense them as individuals, much more than tomatoes or potatoes. Everything is connected. If I believe my father is dispersed now and exists in The Wind, and that my mother and father can be seen together as red cardinals, why would I not feel the individuality of a pumpkin, and here a voice out of that orb.

I have been shamed online for this before-but I truly take to heart that I'm eating things with energy and character, be it a bean or a carrot. Before I harvested the pumpkins, I started fall pruning in the front garden which is still young and unstructured. I mainly cut back the yarrows and Queen Anne's Lace, but I thanked them all and said I'd see them next spring.

So, it is the beginning of the end for each seed that is now a beautiful little orange orb. One by one, I will pick them out of the heap and feed them to the pigs. I like to think when they are taken off the vine, that's it, they never sense a bite. But who am I to say, who are you to say, if that is true? We will never really know, unless of course someday we are in fact, a pumpkin.

I did save one giant pumpkin out in the patch. Every year, Earnest and I try to grow one of those huge pumpkins. We grow our pumpkins in the compost pile which never require water, of course, adding daily water would help, but that defeats it all. We like to see how big they can grow simply with the sky's water, and the nutrients of equine and sheep fertilizer. We have had many big ones. Earnest always says that every year he will grow a huge pumpkin and enter it in the fair. But he never has-he either forgets to enter, or eats the pumpkin. But the idea that he might grow a huge pumpkin of award winning features is just a worthwhile venture for both of us.
Posted by Katherine Dunn/Apifera Farm at 6:38 AM