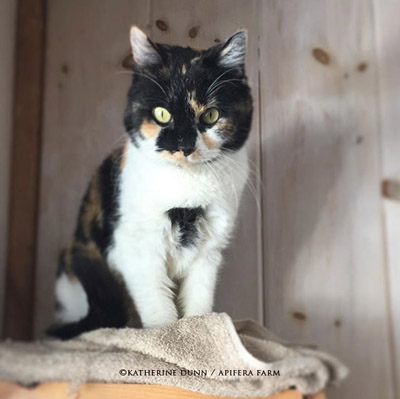 I have to tell you the news that we had a death last night. It was expected, and in some ways I was relieved. Miss Spring was one of the elder cats. She came here in spring after she was brought to the shelter out of a hoarding home, where the owner had died and neighbors knew there were animals in the house. At the time the shelter told me about her, I put off taking her because Laci was not well, and eventually would die. I think it was another month before I went to see her, and she had been at the shelter for a few months.

I named her Miss Spring since it was a new beginning for her, and it was the season. She was the sweetest old lady, every morning she was there on the table for me, mehing, when ever I opened the door. I always picked her up and held her, I'm so glad I did that. Not every cat likes to be held, and get a smoochy face from a human, but she did. I knew a couple weeks ago her behavior had changed and she was fading and she had declined really fast. On Tuesday when the vet was here, I told her my thoughts, and she concurred. In the last two days, she was transitioning and I was able to tell her it was okay to let go, and slowly she did. I have two piles of raw wool from the sheep and in winter the cats love it. She had bedded down in one for the past few days, it was not her normal spot but I knew she was cradled in comfort there. She wasn't showing distress, just fading. This morning, she was gone, sleeping in her wool bed, the other cats up and about on a new day.

When I got the email about taking on the 20 year old [also a Calico, like Miss Spring] and her 15 year old son, I thought of Miss Spring. One might have thought, "It's not fair to Miss Spring, wait until she dies before bringing in another." But I knew when I got that email, Miss Spring was somehow showing me she was letting go, and she accepted this, and less than 24 hours after the new elders arrived, Miss Spring was gone. She did not rise yesterday, I talked to her and petted her, Noritsu as usual came to my aid to nurse us.

And this morning, I did all my chores in the cat room, and attended to the living, first, before going to her, because I could tell she was gone by looking at her body, tucked into her wool bed. Finally, I reached down to touch her, and she was indeed dead.

But she opened the door for another elder, one who is also probably not going to be around long, but I really innately feel the two lives were meant to entwine like this. One Calico leaves, another Calico arrives.

We are going to bury her amongst some tulip bulbs I just bought, and when I look out the dining room window in the morning, she will rise each Spring, forever.
Posted by Katherine Dunn/Apifera Farm at 8:49 AM

So beautiful ... Miss Spring in her wool bed is such an image of comfort (and wouldn't we all want to "fall asleep" in that manner?) and I love the poetry of her resting with the tulip bulbs, rising anew each Spring. This autumn feels particularly heavy with the shedding and letting go ... probably me getting ready for some goodbyes here. sigh. sending love, as always! xo

Such a beautiful post and honoring of your dear Miss Spring. So sorry for your loss.