My blue hangover was worth it 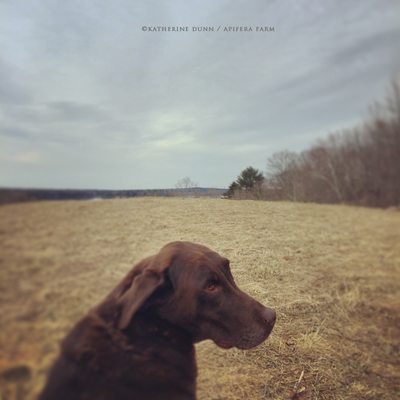 Yesterday, Muddy came bounding into the bedroom at 5 am like always, pushed his wet nose under the blankets and flipped them up sending a shot of cold air on my skin. He does this every morning. But this particular morning was his 9th birthday so I sensed he was a tish happier than normal. Muddy starts everyday with enthusiasm,

Yep, yes, it is, Muddy, especially with your wet nose on me.

The excitement of the day's voting was also part of the energy and I was excited, but anxious. I know many were. In Maine, we overwhelmingly sent a message to the sitting governor, president and current political believers of the administration–NO MORE.

We elected a moderately leaning Democrat woman, and put the house and senate in Democratic hands. We voted against another Trumper business man for governor - and we have suffered through a horrible governor here for years. What I'm proud and relieved to see is there were no tight races, this was a mandate, with most Dems getting over 60% of the vote, and turnout was high.

I have hope. I think what I hope for most is that there will be an effort, somehow, for politicians to come together more in the House. Dump is not going to change, but he at least won't go rolling down a hill without brakes out of control without any speed bumps. He has wasted no time going right back to his onslaught of the media, and lies, pointing fingers, and we're right back into the circus.

One thing I feel needs to happen is to bring more understanding to the city elite and progressive leaning people about their rural neighbors, and that somehow rural people with certain views have to be more clearly heard and understood. I'm not talking about persuading either side to switch views, but I live and work with many people in my rural villages that are good people that voted for the current president. I do not believe everyone of them is a racist. I do however feel after two years, that sexism, and racism has to be acknowledged by everyone. If you can't see it, I believe you need to be educated on it...but I'm sick of rural people being designated as ignorant and uncaring.

To me, many [not all] of the city elite saying these things sound as elitist as the white men of the Senate and former House they love to criticize.

SO I was excited for the voting results. I also realized as I was in my little town hall in my village of 600, how much I love where we are, and how we are truly meant to be here. I feel a real sense of community here. When people went in to vote [it's the old school building that is now the town hall] there were-mainly elder-towns people there volunteering, and then there was a long table of sweets and goodies manned by other towns people. People stood and chatted. I stopped to get my trailer license, and someone said,

Two years ago that might have freaked me out. Today, I feel we are becoming part of the community and region, and we are also giving back to it with our work. I walked out of there just feeling so positive how the universe brought us to this exact town, and house and at this time, for a reason. It's all part of our path here.

I also feel the current administration-which is exposing the underbelly of America that has always been there-is also meant to be here, at this specific time, for a reason. I don't like it, and we can change it, but it is teaching us all many different things-be it the fact that whites are born into privilege no matter their income, and that racism is alive and thriving, as is sexism and every other ism.

But I felt hope again last night. And I do have a tish of a blue hangover, after a bit too much wine runneth over. But one has to let off steam.

And besides, it was Muddy's birthday.
Posted by Katherine Dunn/Apifera Farm at 12:06 PM

Happy belated birthday Muddy. Feeling a
Bit more positive politically here in VA as well. There’s the smallest breeze of change in the air...I’ll take it.