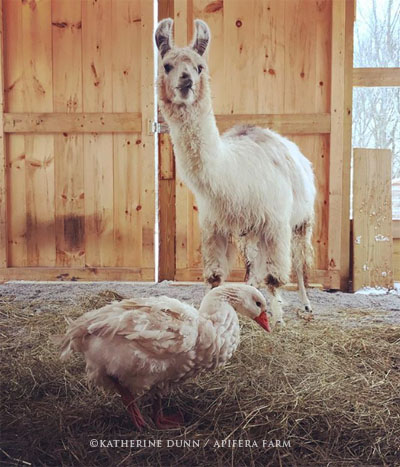 I once was contacted by Animal Planet some years back, a producer was looking for unique animal couple stories. At the time, we had recently brought home Earnest the pig, and he and the newly arrived Marcella, a pup, were the starring couple. Pig and Pup I called them, their friendship went on for years, and still exists although they have entered a new stage of their relationship-where Marcella is the boss. And of course I told them about Stevie the crippled goat and Rosie the grumpy pig.

"Do they do anything special together?" the producer asked.

"You mean, does the pig carry the pup around on his back?" I asked.

I said they did lots of charming things, like caressing each other, watching out for each other....but I said they did animal things, like biting out if the other got too close to food. These were real animals, I reminded her,not Disney characters. I swear some of the animal videos we see out on the internet are staged, people training their dogs to ride equines or chickens on bikes...nothing wrong with that, it brings a smile, but not my thing. I mean, my donkey writes poetry and my pig thinks he's still going to meet E.B. White someday, that's good enough for me.

So I am cautious to tell you that the goose seems to be bonding with the llama.

They have not sung a song together, and so far the goose has not gotten on Birdie's back. I do not think I have to worry about them going viral, yet.

I do believe in letting animals work out their own dynamics in the barnyard, if it is safe. The goose, who I have not named yet and must do that, as she is too beautiful to not have a name matching her grace, since last night has seemed to have attached herself to the llama. Now the goose came here because the farm where she lived felt she was lonely, and she was not able to bond into the duck yard, and the goose's own mother pushed her out after she had more goslings. So the goose more or less imprinted on the farmer, and I often sit with her, and she loves to put her long neck under and into my warm coat, and I pet her.

As you know, I have Birdie inside the barn because she had a set back with the horrible M worm, and we are once again giving daily shots of anti inflammatory med, which as we are day three, appears to be helping. Last night when I went to do feedings, there was Birdie, standing comfortably on her feet, not as stumbly. And beside her, was the goose. I took a picture of it as it was charming to see two differently sized white creatures of such grace, an odd couple for sure, side by side.

This morning, Birdie was standing when I got to the barn which was so good to see. As I did clean up and feedings, I kept hearing the goose roughing up the ducks, one in particular. I figured because Rosie was still finishing her breakfast, that the goose was being territorial about that. But then I fed hay to Birdie, and the goose went right out there, and defended Birdie's hay from the ducks. She made them walk away, and then she stood with Birdie and I took some photos.

So stay tuned. I do know in my many years of care taking, that certain animals are more prone to be caretakers themselves. And you never know who it will be. Sometimes it is a complete surprise. In watching the goose try to interact-or not-in the past couple weeks with the ducks, my sense is that she is not a 'fowl' fowl. She prefers other creatures, even making her way into the Boone stall, which was fine, but I took her out since he could accidentally step on her, but he was fine with her. I like to let animals make their own living arrangements, if possible.

So, we will see. It might be the beginning of a wonderful relationship. And since Birdie might need to be kept in the barn like this, where she is safe if she falls, I think I, and she, will welcome one more caretaker. Birdie can see her sheep and White Dog, and the barn is very open so she is not alone.

Stay tuned to see the [maybe] the developing relationship of Goose & Llama.

Posted by Katherine Dunn/Apifera Farm at 9:11 AM