Sometimes woman and llama, and goose, just need to "be" 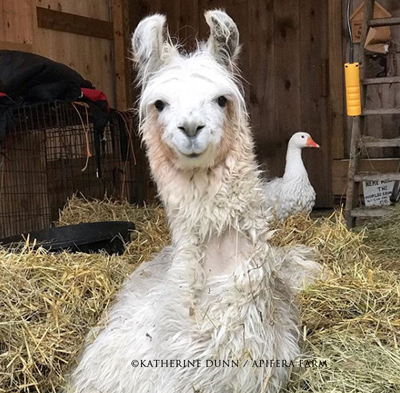 It’s been two harder days of therapy for Birdie. I took this photo after our session this morning and was pleased at her expression. She has been a bit off in the past couple days, just not as happy. Certain areas that used to be warm to the touch, or give her a definite 'zing' have subsided [for now] so that is positive. But her front leg is giving her trouble and I think she might have strained it, although there is no heat to it.

I know she understands my intention. I seek out hers everyday. I hope my eyes are clear.

I have worked on hard cases before with animals, but never one like this. Usually in the past, I was trying to revive an elder goat back to some normalcy after a life of neglect. Aunt Bea comes to mind, I fought hard on that one, and so did she-what a trooper she was. Three weeks of vet help and nursing her, making a sling out of seed bags, carting her out to the sun in a wheelbarrow of straw...and we couldn't save her.

I don't know what is going to happen. I have had days where I felt dejected, but as my physical therapist friend said, look for the recovery to be a net gain of days-it's like the stock market, things can go down but over time you want an upward trend. So far I have felt there is a net gain in recovery.

But one has to remain clear eyed, and it is a slippery slope when one is bonded with an animal, and one works with an animal in a certain way that is slightly more intimate than with other animals. I can count White Dog, Marcella, and Birdie in this mix, Pino too, as well as my old departed friends of Stevie and Guinnias. All the Misfits are special, but these are the healers. Boone is on some levels too, in fact I think our time has not yet come.

So things felt positive, and then two days ago she had swelling again which we got down with anti inflammatory meds. Oddly, it was the opposite leg this time. We can only assume things when this happens. There were positive things but her front leg [her front has been very strong the entire time] is troubling her. We wonder if is strained although it is not hot- sometimes she scoots around in a circle [lying down]and uses her front end mostly. I have been working on the leg and got some release from her this morning [ie she was freezing her leg stiff, and I got her to relax it], but I’m not sure why it is happening. I also wonder about neuropathy. I worked points on her feet and hocks which are associated some with spinal issues. Because the dead worm is not passed out of the body [they call this being a 'dead end host' unlike stomach worms that are passed out in the feces]it is absorbed by the body but bits of it can float around and cause issues. We can only surmise. Her neck had also really curved all of a sudden but I really worked on it for past few days -which she liked- and this morning it was straight. I think she is compensating for the front leg. My Grace has not been massaging her or pointing out spots and I am taking that as a positive thing-but there are no answers on this journey. I've begun rubbing her feet pads with a topical I like, and her elbows-so far we have prevented any kind of bed sores. I think the last two days she had discomfort in her front leg. But not her spine and other areas that used to be sensitive to the touch.

Many of you are following along and we appreciate that. I know that part of my life here is sharing these stories. Sometimes though, I have to keep parts of my time with the animals all to myself. I am getting lots of emails and messages-99% with good intentions and kindness, and that is very kind-but sometimes I feel I want to retreat with Birdie, and just be private. If a day or two–or more-goes by without an update, don't read good or bad into that, don't assume I am depressed or overwhelmed-I just might want to be. And just wanting to be does not require social media.

When I arrived at the barn this morning, Birdie was sitting straight which was good. And when I left, she gave me her classic look, and I took this photo. It made me feel good to see that, after a couple days where she seemed a bit down, or just a bit uncomfortable with her leg.

Posted by Katherine Dunn/Apifera Farm at 9:55 AM

I understand. I will try to not project any of my anxiety for Birdie and this situation and not having daily updates onto you.