We lose Cornelia, but my hands are on living bodies 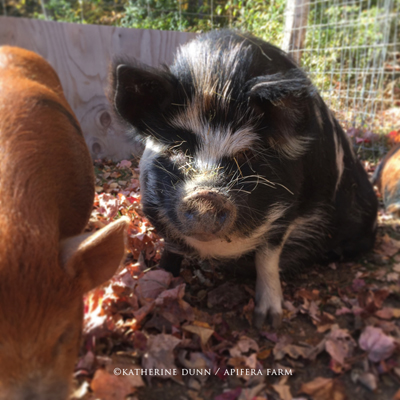 I just could not believe it. Arriving at the front barn on Wednesday, I found my beautiful, sweet pig, Cornelia dead. There was no sign of struggle, her bedding was tidy, nor were there any physical signs to give us a clue as to what happened. Her eyes were closed, so she died in her sleep, otherwise her eyes would have been open in the death stare I've seen a million times. The only thing that came to mind was that she ingested a shard of glass out in the ancient midden piles she likes to sun in, but I had a sheep do this and it was a process of suffering and clear signs something was wrong, and in that former case the vet found something blocking/ripping her lower intestine. We would have seen other signs in Cornelia. The night before I sat with her, the goose and Marcella as I often do before going back to the house. I'm so glad I did, and I'm so sad she is gone. She was truly the cutest pig. She was the one who stayed by Daisy's side when she was dying of old age.

So, it is a double whammy. I've been dong this for 15+ years and it does seem like things come in waves in life-good and bad. Perhaps the energy gets released and attracts like energy. Perhaps the gods know there is a reason this is for the best. I do think Nature has so many mysteries, but is all knowing too, and non judgmental about what has happened.

What I shared with my social media followers is that I have witnessed a lot of death on the farm, and Cornelia had a good death. I like to hope Birdie did too in the final moments, but I don't know. I know Cornelia died in her sleep, and she had a beautiful day to nap in the sun before she died. As far as a pig's life goes, hers was a good one. I have seen so many pigs-probably more in the pet category-live not so great lives. I guess people like to assume that pet pigs have it better that pigs at farms, but I would argue against that. How many people go out and bring home a 'micro' pig [there is no such thing] only to tire of it when it grows into a ...well, a pig, or they don't like that the pig is ruining the house [no, I would never have a pig in the house]. These pigs often end up in bad health and sent off to some rescue where another person buys them who doesn't know pigs well and the revolving door starts again.

So Cornelia got to live like a pig, and I was blessed to have her.

Little Lonely and Eleanor, and Marcella, were all standing around waiting for breakfast when I came in. They knew Cornelia was gone, and they were showing all of us once again how to deal with death-acknowledge it, and then step back into life. One can and should grieve, but always while balancing it with the understanding that life will end, so best to live in it now.

Still, I was mad. I said some choice words to the heavens, or lack of them. But that was a release.

I almost felt like keeping it to myself. Followers often get worn out by this I think. Like one woman who quit reading me wrote, it's not that she didn't like me or the farm anymore, she just couldn't see one more of her animal friends die. I guess I just have never gotten to that point. I mean, I just see death much more as a morning to night experience-both are beautiful times of the 24 hour period. You can't have one without the other. An animal dies, and there is a shift in the barnyard, interesting things happen-an animal might gravitate to another animal creating wonderful stories or an animal dies allowing another to blossom as the hierarchy changes. I don't relish death of the animals, I just try to look at it from Nature's perspective. You can't beat death. And how sad it must be to be so crushed by a death of animal or human that you shut down to more love from other humans or animals. It is a process, this grief, I am not downplaying that, but any farmer will tell you that death is often Nature's best remedy for times when facts can not be revealed to us trying to help.

Having said all that, I am looking forward to spring, and the surprises it might bring-will the goose finally lay an egg or is she a he? There are some new Misfits slated to come soon. Will a new llama appear for me? Will the blind chicken lay eggs again? I try not to think, "Oh no, who will die now?" but it did cross my mind the next day. But it is a beautiful day, I have been doting on the donkeys and grooming them and The Teapot. My hands on living bodies, eyes averted when needed to look towards the graves of fallen friends...but only for moments. 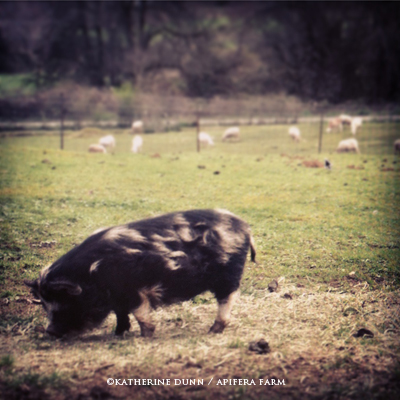 Email ThisBlogThis!Share to TwitterShare to FacebookShare to Pinterest
Labels: Cornelia the pig, RIP

Don't hold back. I've had to put down two beloved pets in under a year - one old and one a kitten. So difficult but I wouldn't have traded my living time with them for no time at all. For me I find your writing on the farm events a reminder that death is part of the life-cycle... part of nature... part of the plan. That animals know more about it than we do (at least in accepting it). That we need to let go to have the next adventure or learn the next lesson rather than be stuck. Not hours after Birdie left you were tending the others. They were getting your attention. Perhaps Birdie knew you were meant to be more present for the rest and wanted to give them that gift instead of taking all your time. They are so in tune. She helped you down your healing path and helped you learn so much to benefit others. I understand why people might leave because they can't stand to see animals die but perhaps they would be better off reading a book that guarantees a happy ending. I enjoy and welcome the authenticity of your writings. Thank you.

I have always admired you and your sensibilities toward the living and the dead. Your thoughts make Birdie's passing somewhat easier, definitely more gentle. It comforts me that you are moving through these latest passings with love and compassion for your Misfits and yourselves. Your work is so important! Feel the fans who lift you. xox

I will keep reading your blog; yes it covers life and death and then life again. New animals arrive. Chicks are born. Each one has a name and a personality.

Thank you for this, Katherine. I needed this beautiful perspective as I continue to care for and appreciate my other equine and cat friends. Much love and thanks, Ruella

Years ago, I read a book that started with "no animals die in this book." Silly, I know, but I guess people don't like to read stories about animals, connect to them, and then read that they died. It's easier to just not read those books or blogs....but then I think they are missing out on a great animal. I'm sorry about your animal friends, but I'm glad you had them in your life...and you share their stories with us. Okay...we can love them, laugh at their silly doings, and cry when we lose them--that is life. And while I am a big talker...I can't have hamsters because they only live like 2 years and I need more time between cries. ;)

Beautifully expressed! What is hard often holds the most precious of teachings and gifts. Death is such a powerful teacher and it gives meaning and flavor to life and living. I was finishing "The Good Good Pig" yesterday (knowing I would be weeping at the end) and I thought of you as I read the final lines: "A great soul can appear among us at any time, in the form of any creature. I'm keeping my eyes open." Apifera has been home to many great souls, teachers on life, forgiveness, trust, healing and joyful presence. And many more will be coming, because the love you shower upon them is a magnetic force drawing more love in. xo

The circle of life is not always smooth and round. Wishing you, Martyn and all the animals peace. L

Aw, bless your 💓; rough patches due to loss simply stink; we have been informal rescuers of cats and dogs for, well, decades now, and hit patches where the losses cluster together and it feels like no tears are left...but, of course, there are..and then some goofy somebody does somwsomet to make us smile through the sore hearts...there are seasons when it is simply exhausting...the cost of providing Haven and loving, I guess...