I am now a Maine Apifera...so some reconfigurations are going to happen in the barnyard 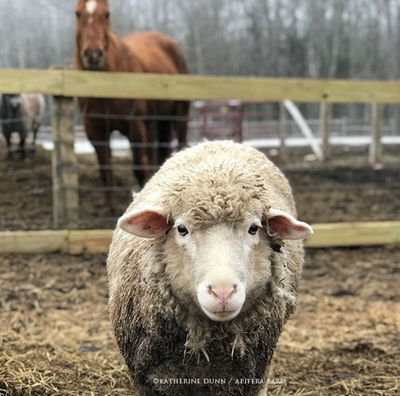 Little Sylvia Petinni is still the sweet little thing she was on arrival. She was a bottle baby, and started out life a little on the rough side due to her troubled birth. I took her on with her retired mother, Calla, who is still with us. Calla had some issues so was retired after giving birth to Sylvia. Sylvia is still very personable due to her upbringing. She comes to me, usually, looking for some attention. She has overcome all her eye issues she had after birth and is healthy.

When we first arrived here in Maine, I missed my old flock back West terribly. I mourned the old farm, and my old role as shepherdess. I underestimated how much sadness t would bring. I had to leave them behind, it was just unfair to move them out here, and we didn't know our pastures well since we had never visited. I knew they would begetter staying on their land they'd known since birth. I'm so glad I made that decision. I put down some of my oldest girls that were on their last days, and sold some young ewes before leaving, but about half the flock stayed on the farm.

So when we arrived here in Maine, I kind of had my feet on both sides of the river. I was still a mourning shepherdess, and we had not become a non profit. I was still evolving as an Apiferian in Maine. So I went out and found a small flock of five wool sheep [we had raised hair sheep out West]. They were CVM sheep, a rare breed in danger, and I liked the fact I was helping-just like when we got into Katahdins they were endangered and we helped bring them back along with many others out West. I was torn about breeding, my gut was telling me not to breed, but it was what we had done for 15 years. But my gut won out, and I did not get a ram. Raising sheep from birth to death is so much different than just owning them. I care for each of the five, but except for Sylvia and Calla, I am not as attached to them as I had been to my original flock. It's just...different.

In time, and now that we are going on our 4th spring here, I know I am no longer a shepherdess, nor do I want to be. I have grown into the Maine Apifera. My mission is to help people through my animals. The animals we help are connected to the people we help. So I have decided to rehome three of the sheep who are young, and should be with someone who truly appreciates their rare fiber. I like wool, I really do, but I am not passionate about it. This breed is rare, it is a heritage breed that is being helped through breeding. I want them to go to a home that will breed with care, and it appears I have found that home, thanks to the help of the farm I bought them from. I would not be rehoming them if I felt uncomfortable.

Sylvia and Calla will live out their lives here. And it will also allow me to reconfigure some paddocks for...well, I will tell you all that soon. It is all good, and it all ties into our therapy work. Stay tuned.
Posted by Katherine Dunn/Apifera Farm at 11:11 AM