Well, I think My Grace the goose is Goose the Guy 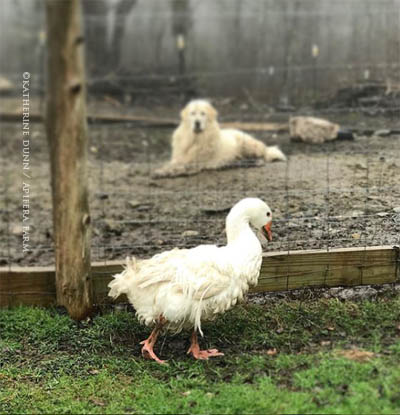 We have been waiting to see if the goose would lay an egg. We are beginning to realize that My Grace is most likely a My Lord, or a guy. I think she-he would have laid by now. When the goose arrived, the former owner thought it was a girl, but said she was no expert in vent checking geese...who is? I did attempt to research it and spent a short bit of time examining the vent but didn't see anything or feel anything that supposedly made she a he.

But, I am no goose vent expert...again who is?

I also began to think she was a he when she-he gravitated to females–Birdie, Marcella, Rosie. She-he seemed uninterested in the new male llama, and even got a cow kick out of him.

I don't care what sex she-he is, I love the goose. We have worked out the current arrangement in a way that suits many. Goose spends nighttime in the barn, safe, and sleeps with Henneth the blind chicken, Sir Tripod Goat and Else. Sometimes Opie is in the mix, but of late, she-he has gone after Opie at breakfast. During the day, the goose goes outside, but stays on the opposite side of the fence where Marcella is. This allows she-he to be safe from hawks and eagles-I hope-but also hang out with the three goats, and also have Marcella access through the fence. Marcella and she-he were getting along, but Marcella can be really aggressive around food which his a Maremma trait, and even though I separated her at feeding, if there was one kernel of food left she would snap at the goose. I just didn't want any trouble. Sometimes I put she-he in there so she can play in the puddles. She-he also doesn't get along with the male ducks.

In fact she-he is an independent mover and shaker. I suppose I will have to get him a wading pool for the warmer months. She-he seems very content, and when the goats come in at night, there she-he is, I don't have any trouble out of him.

I admit I still look for the golden egg...Earnest would love them.
Posted by Katherine Dunn/Apifera Farm at 9:44 AM

Email ThisBlogThis!Share to TwitterShare to FacebookShare to Pinterest
Labels: My Grace