When you lose a dog...explore the spaces that are left-that is where the healing and opportunity lies 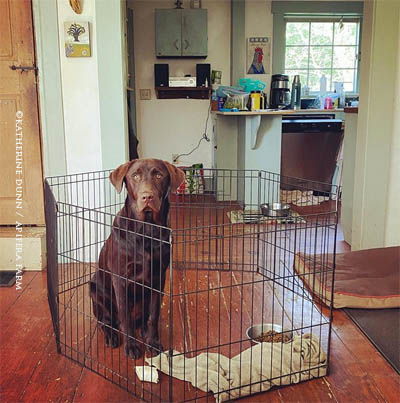 Some followers are wondering out loud if Bear needs a new dog friend. Perhaps in time. But right now, it is my time to be with Bear. Bear and I were just beginning to evolve into what ever our partnership was meant to be, back last winter when he arrived as a pup. Then the virus took over everyone's life. I am so grateful Bear and I went out right away when he arrived and did therapy visits at Cove's. Our time their together was so important to us, and of course the memories of Bear and John and all the others is a warm spot for me. I've written before, there were times after the virus arrived when I wondered if Bear's main purpose at the time was to befriend John in his final months.

So, back to getting another dog–I expect someday there will be another dog. But right now, Bear and I are exploring the spaces created by Muddy's departure. After someone or something departs, we survivors have to feel the spaces, spaces that are both physical and emotional. It is often painful. But there comes a time in loss when one can see those spaces as opportunities for new encounters, new adventures, new friends...and yes, new dogs.

Bear had a lot of good training early on. He was a smart and calm pup when he went on therapy visits, everyone commented on that, and even I thought I had truly found a born healer. Once the virus took over, Bear was not out socializing with people, he was home with me and Mud, being a pup, a dog. And then at some point, Mud was diagnosed with terminal cancer with weeks or moths to live, so my focus shifted to Mud. While I didn't neglect Bear, I most certainly was heart pointed to Mud, and Bear knew it. So did Mud. I think Mud wanted me to be focused on Bear, so he could let go. At some point I discussed that with Mud, and told him not to worry, that Bear and I would rise again to do good work together.

If I went out and got a dog now, spaces would be filled for Bear, and me, by another dog. Bear and I need to fill the space first.

I've been doing a fun training game with him. Our old house is unusual in that, despite it being built in 1760, each room has two doors, so you can do a complete circle from room to room. So I make Bear sit and stay in a room, then I walk to the next room where he can't see me, and make him wait for my 'come'. It's sort of more like a game this way and is fun.

Bear still becomes the pup I brought home that day, the pup that clung to me with his front legs for many days if he was scared. Bear will still sometimes come to my side of the couch and try to get in my lap like he did as a pup. I tolerate it so long to show him comfort, then make him stop. He is learning to be outside for longer periods while I do chores inside. Initially after Mud died, he got scared. I mean he is only 6 months old.

Bear is allowed to do night chores in the front barn with me. It is is the barn that Marcella lives in and although she can't see Bear when he is in that barn, she knows he is there. Bear can not go in and out of the barn at free will, only if I am there. This is the first house dog I've allowed in a barn like that. Bear can also nose White Dog on the other side of the fence. He has goats, a goose, a Pickles, and he has me and Martyn. And he loves the house cats and often goes to sleep near them, or lick them.

So...that is the update. There are spaces to feel, and we are feeling them. So there will be no new dog for now. Unless, like I said, there comes a knock on the door and a blind one eyed pug with a suitcase shows up.

Posted by Katherine Dunn/Apifera Farm at 8:07 AM

The wisdom you have accumulated is right on track. Bear needs to come into his own with you and yours before he will have the confidence to assist a new spirit into the mix. Thank you for your service, deep thoughts and the loving light you share with the world.